The Etruscan culture and history.

A region that is located in the central region of Italy towards the West Coast received the name of Etruria. The Etruscan people created a culture with unusual characteristic for the time and definitely eye-catching and particular sore to speak in some way to the taste of their contemporaries in the region. 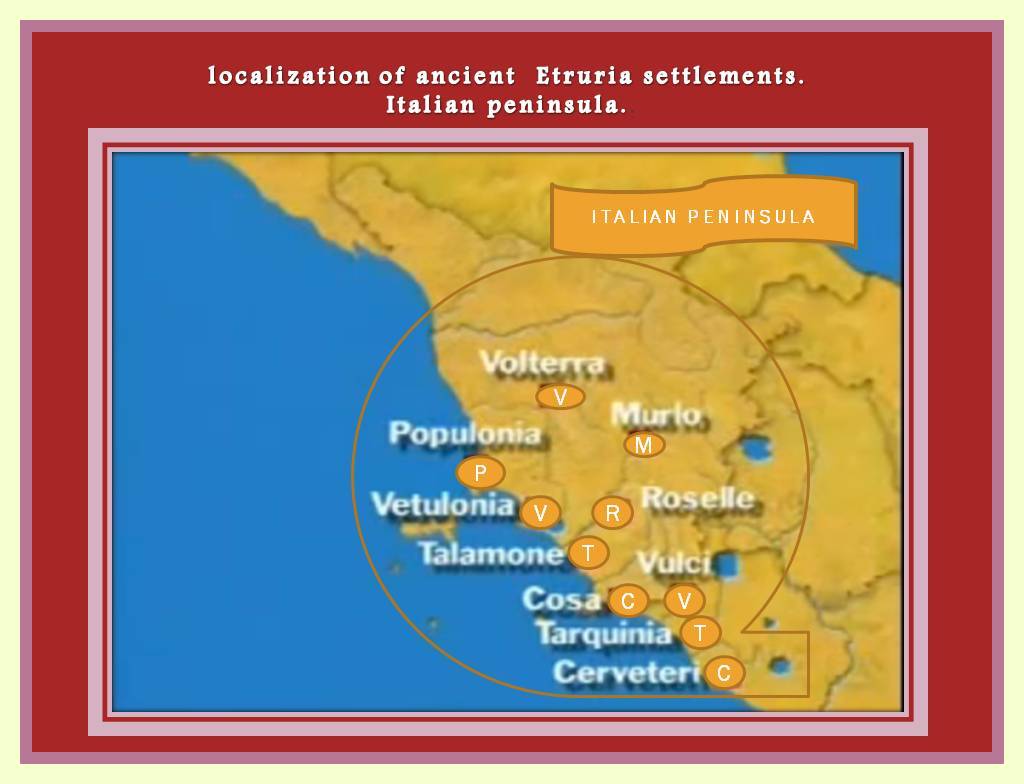 Centered around of what was known as City-States which emerged and later flourished between the period comprising the 7th centuries and the V centuries B.C. on which its power in the region began to decline at the time they have to engaged with fighting with Celts, Greeks and Carthaginians and adding the fact that they did not have a State as such unified.

Toward the II century B.C their problems due to external invasions and the pressure of Rome put on impoverished situation this conglomeration of Etruscan cities becoming practically in a natural way that they were absorbed by Rome and fade away as independent cities in the 1st century B.C.

The Etruscans called themselves as “racennas“. The Greeks called them “Tyrrhenian” and the Romans “tusks” or “Etruscan” as is known this culture today.

The system of Confederation with which were United under common religious principles rather than under political or in some ways economic interests was not a solid base to hold against the external invasions, these cities were too individualistic to work together for one greater purpose. 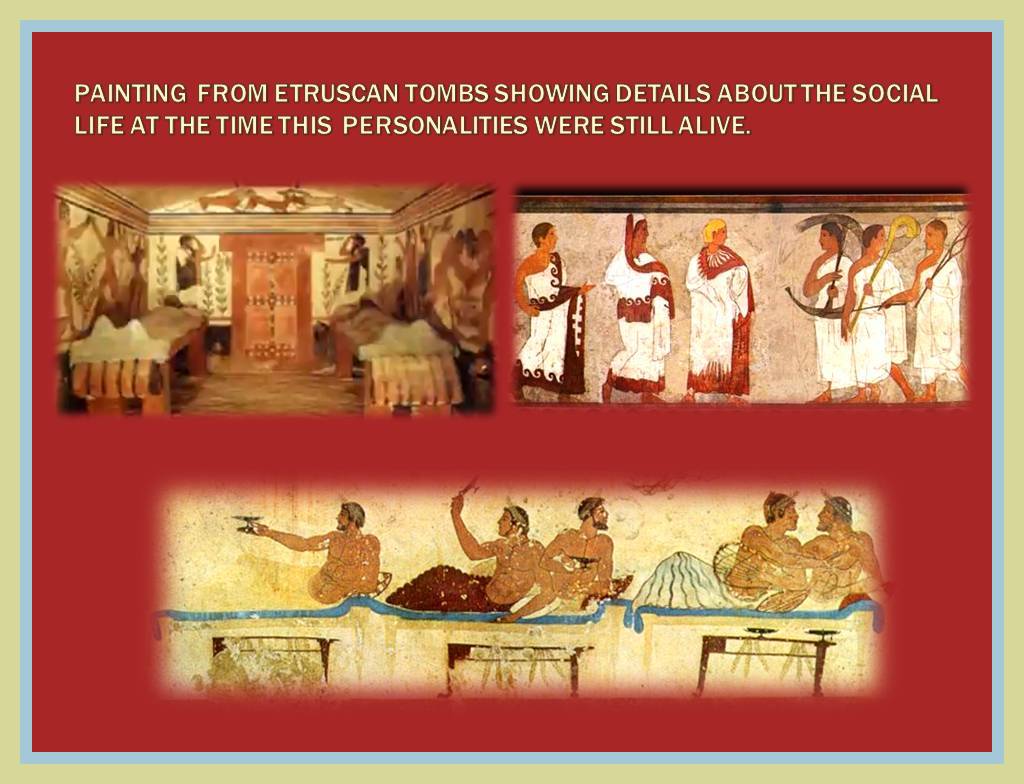 It is known today by studies that the Etruscans in their flowering stage were an important culture in Italy and that influence was so strong and resonant to extend by the peninsula as a whole. Thought on the basis of the evidence found that this culture was developed from a prehistoric civilization known as Villanova, which was developed between 900 and 500 B.C.

Different theories from Greek stories and Chronicles reflect about the origin of Etruscans, all of this is motivated by the lack of documentation regarding the enlightening.

Due to the Greek influences and inhabitants of other regions in their art and culture in general, is not ruled out today that they have actually been native inhabitants with an intense cultural exchange with adjacent regions and why not; that themselves migrated from one side to another during the period of establishment and strengthening of these cities state until its configuration when they finally settled. The fact is that no one knows its origin for sure yet and that many studies have been done at present to find out, even one DNA-based in the year 2007 of the settlers of the zone in which the Etruscans developed but surely and with certainty yet nothing is known.

It is estimated that around twelve cities constituted this Confederation. These urban centers included not only major cities but also smaller centers linked and dependent of them. 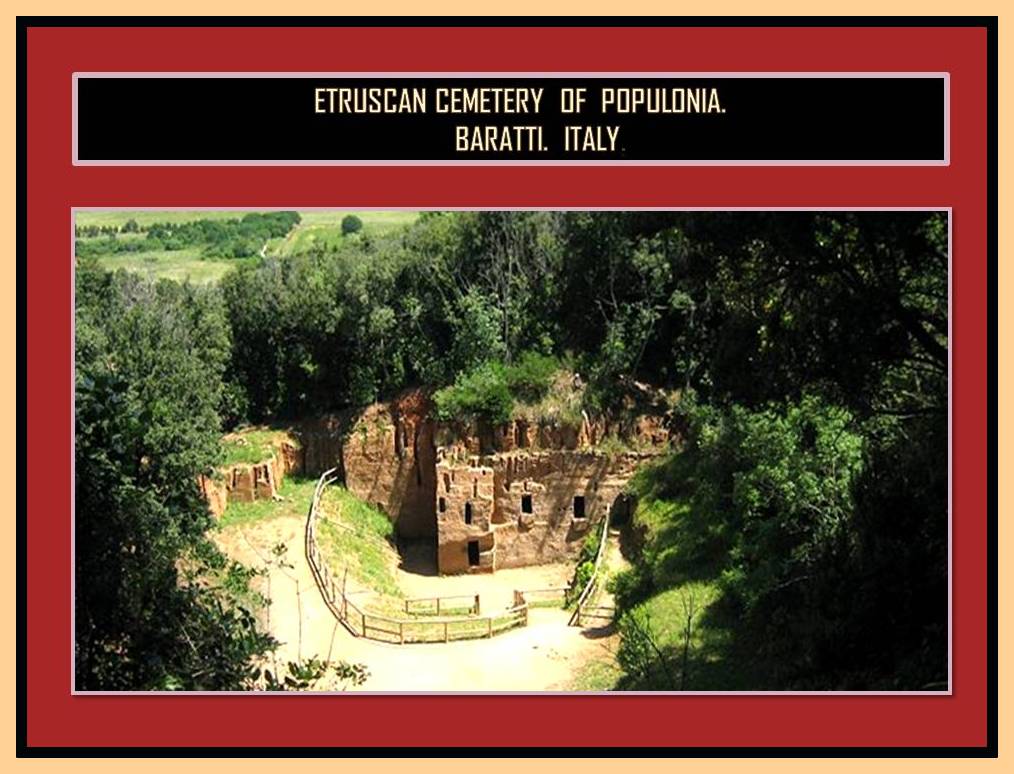 Of these cities great coastal town of Populonia reaches a significant importance for the production and processing of minerals on a large scale. While they had deposits they preferred to bring these minerals by sea, especially the

iron from the island of Elba. They did with this iron weapons to his troops. This iron was also distributed by the rest of the cities of Etruria.

For this transfer by sea had to deal with pirates, assaults of other nations competing for the obtaining of the ore, but their ships and fleet were so powerful that they could deal with this threat and continue with the maritime transportation of ore, of which came to accumulate so much waste in the production process that huge hills of these mineral deposits were used during the second world war for weapons production.

The city of Cerveteri, whose economy was based on agriculture, reached a rapid economic and cultural development from the mineral processing and commercialization of refined products that were manufactured locally. Bronze products came to have high manufacturing quality, some samples were found in the tombs of this city.

The Etruscans were a people fundamentally merchant and retained this characteristic way of life throughout its existence as a culture, not only traded by sea but also by land.

Lack of testimonies written or counted by the Etruscan culture itself has left its history at the mercy of tales of the Greeks and Romans. In these stories or Chronicles they say that the Etruscans have promiscuous promo behavior among other things. Those who told these chronicles were influenced by the particular conception of life of their culture and sometimes some venoms comments based on animosities against the Etruscan is to be take with tweezers and carefully.

It is known that many cultures strongly criticized all that is different to them, the actions of those who are not acting like them following the dogmas that they believe as been the correct ones. That it was what happen with the Etruscan culture, and just because they were different from the others were judged harshly.

Women in the Etruscan culture

As these ancient chroniclers were accustomed to see how subordinated the Greek and Latin women in their culture were to the male supremacy; they did not understand that women in Etruria could participate alongside their male partners in everything that occurred in the social, economic and family life.

Etruscan women even prepared for the case of the event of the loss of her husband to deal with businesses and keep afloat the family patrimony. They were actively involved in banquets, feasts and religious and political events. They liked to dress with eye-cashing clothes and did so with good taste and pride without being for that reason labeled of licentious conduct by their own people, so liked it or not one that another Greek had to recognize in his Chronicles that they looked beautiful.

Women were participating in sporting events in the Etruscan Culture, liked to do exercises, were always clean and dressed with ornaments; especially those of the wealthy class that could afford these jewels. Women had an important position among the Etruscan aristocrats and they were responsible for transmitting the family inheritance to.

In the works of art that today we have the pleasure of contemplating that have been preserved in tombs that occupied the Etruscan region, we see how women were represented regularly in all the artistic manifestations with his male partner, dancing, sleeping alongside her husband enjoying banquets or represented in reliefs, sculptures and paintings showing them in possession of jewelry and body ornaments. 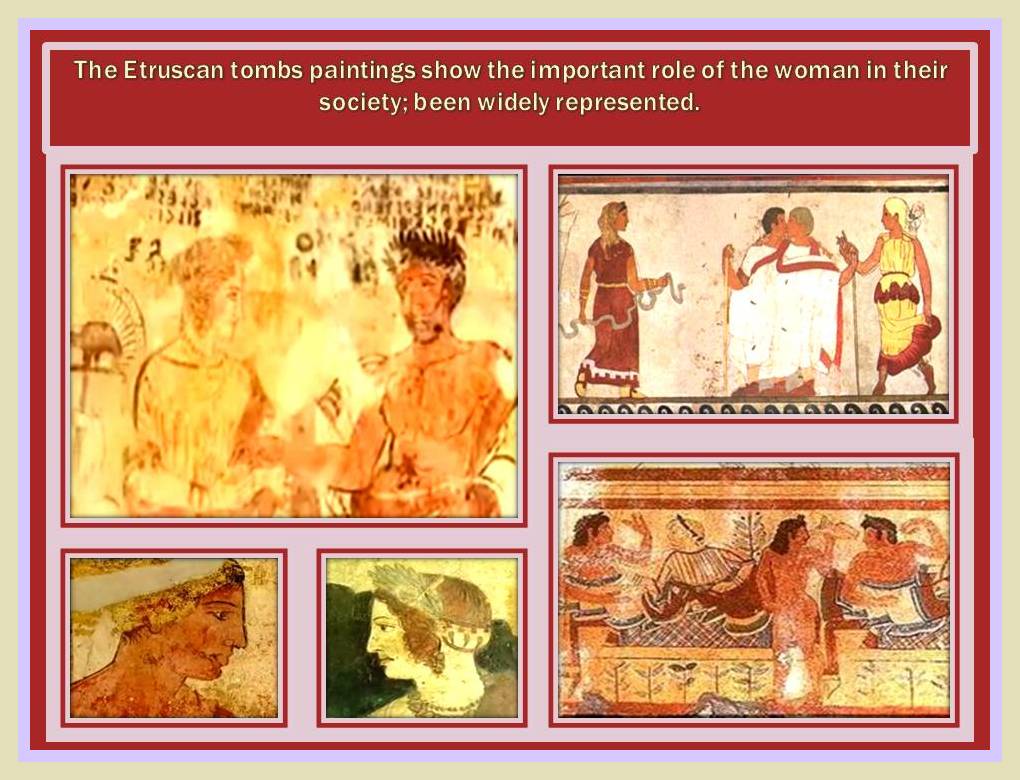 What for contemporaries of the Etruscans was considered promiscuous, licentious attitude or low reputation of the woman was not another thing that the natural way the Etruscan people carried life fullness, but others could not understand that and instead criticized them, they distort and exaggerated the fact that Etruscan women will enjoy the freedoms that they were entitle. For Greek, Romans, Aegean and other people a respectable woman in their view should be confined in her house. All this misunderstanding really twist the real image and role that the Etruscan women have among their people.  In the inscriptions on the Etruscan tombs have been found references appointing both the mother and the father names of the deceased and that clear establish the equal roll that both men and woman have alike in their society. 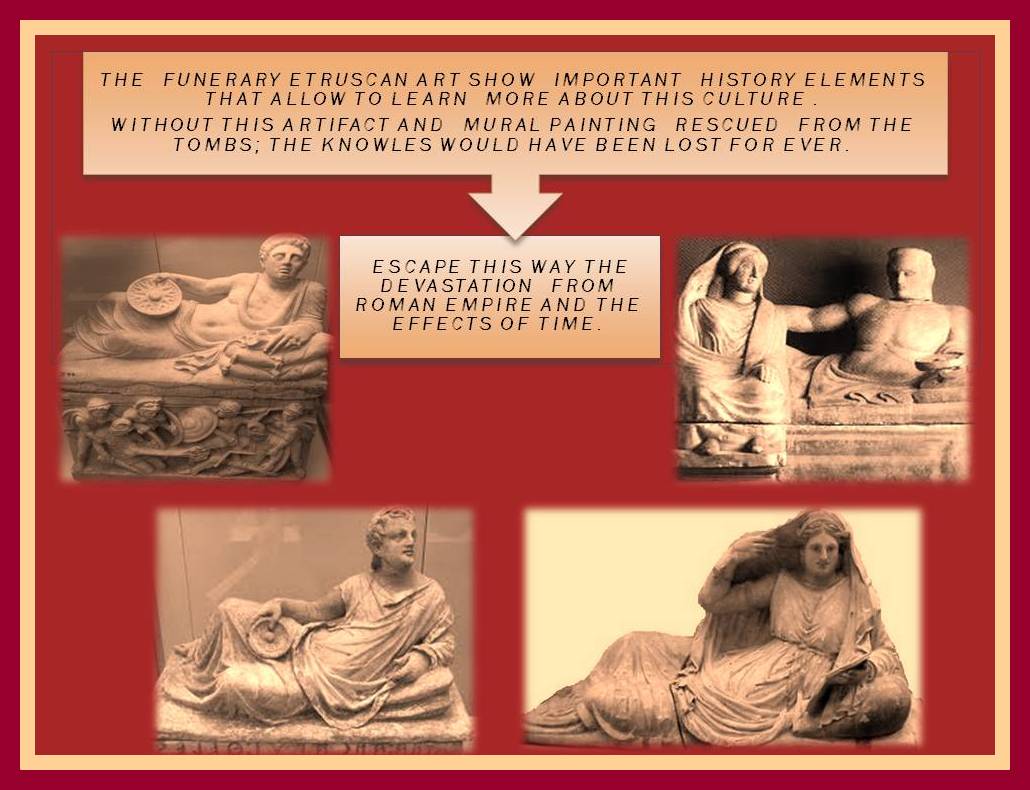 Has been raised by some comparative social studies, that the Etruscan society had similarity to the Minoan culture in many aspects for example in reward to the cult of the body, both lived life intensely, they loved dancing, music, nature and they were likely to perform physical exercises and maintain healthy body, both cultures like sports events and have polytheist religion.  The importance of the roll of the woman in both cultures; the economic trading based to obtain their wealthy and so others aspects have been the based over which they establish those parallel facts.

But the Etruscan differed from the Minoans, however, since the Etruscans those have to surround their cities of fortifications with high and wide walls to be protected from their enemies and also mantein armies and military campaigns when they were required as a defense as well as to maintain supremacy in trade in the region defending themselves from pirates and invasions; It should be noted that the Etruscans were not prone to war or have an invasive nature as the Assyrians for example. In fact for a long period of history they made trade and treaties as it was the case with the Phoenicians to keep the peace. Although they have numerous other enemies by land and sea from whom they have to defend themselves from. 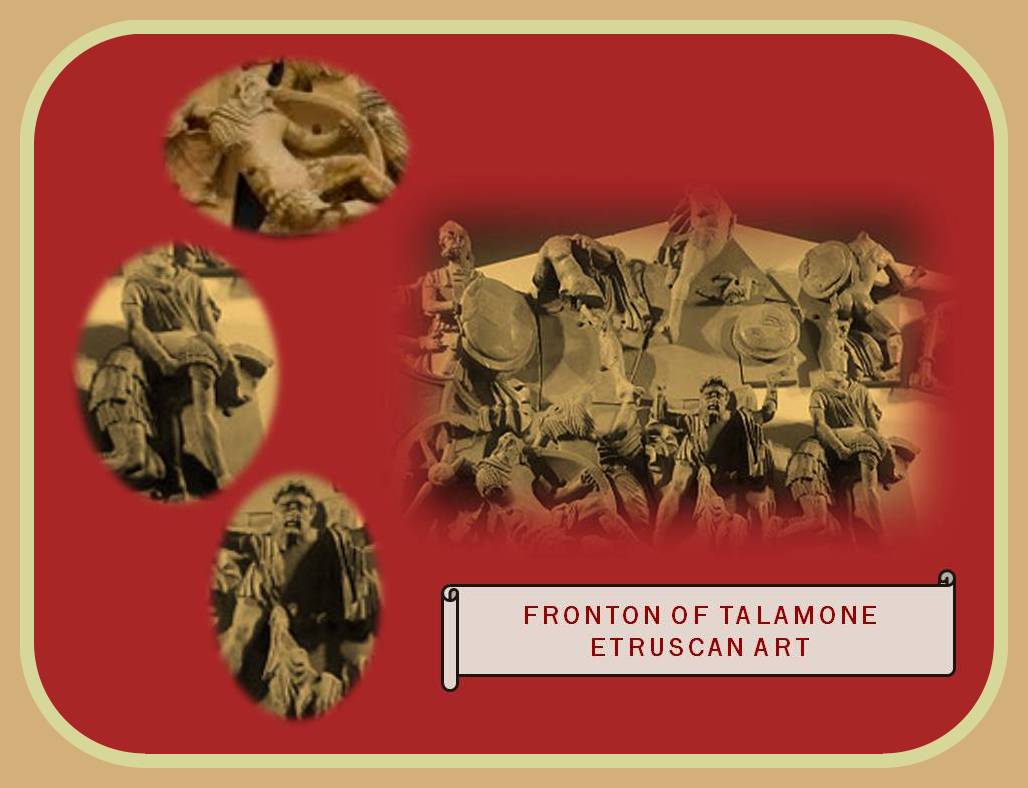 Etruscan art and culture was destroyed as soon as the Roman Empire absorbed them. Thanks to the works of funerary art preserved in their graves is that it has been able to know more detailed aspects of the life of the Etruscans. We do not know for certain why the Roman Empire untie a hatred towards all Etruscan still and when the influence of this culture was present in facets of the life, politic and art of Rome, ultimately was a reach heritage and roots what they get  from their Etruscan ancestors to denied them like Romans did. 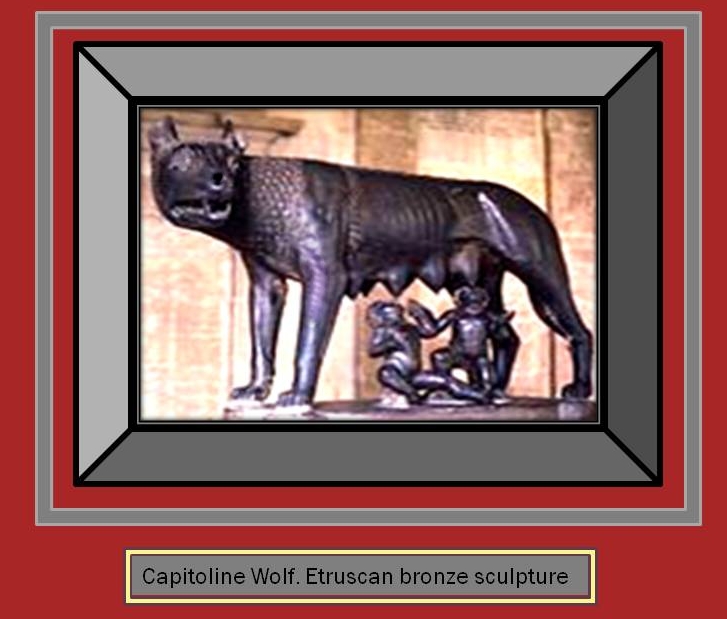 Even the symbol of Roman nationalism of the Capitoline she-Wolf breast-feeding Romulus and Reno, is an Etruscan work; which figures of children were added in a later period. Countless written works were burnt by the Roman Empire, destroyed forever by what has not been possible to fully decode the language of the Etruscans.

Etruscan Phonics is different from the Greek or Latin or any other native root of European origin. Have been calculated that from the 7th century approximately. Etruscan has the same Latin root of writing by what can be read without problems but cannot been understand anything of what is read.

There were rituals of all sorts, both addressed to the State as to the individuals; these were extremely serious and meticulous. There is certain equivalence with religions of Eastern regions in particular with the religion of Sumer and Chaldea and even also the Egyptian. 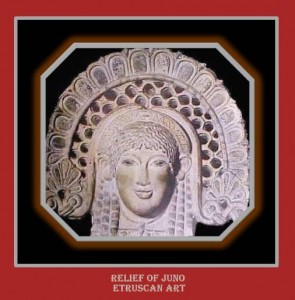 Based on revelation and divination of the future and was keeping in a series of sacred books, which have various topics that were represented in the artistic manifestations among them we have:

– The interpretation of the way in which the rays hit and are projected during electrical storms.

– Divination and precognition of facts or events based on the observation of bodies organs of slaughtered animals and the flight of birds.

– The righteousness of the State, the seriousness and good behavior of individuals.

– They possessed something similar to the Egyptian book of the dead.

The most important Etruscan gods were:

There was also a belief in the existence of evil demons, to Assyrian mode. The Etruscans believed in life from beyond the grave, in a life after death, honoring their dead, perpetuating their memory narrating passages of their life when there were alive.  Artistic expressions in the places of burial had allowed knowing better about this rituals and religious belief.

Etruria fell under the domination of Rome toward century II A.C and was absorbed; disappearing as independent culture toward the first century BC becoming almost a ghost after that. The life and customs of the Italian region where the families for centuries were raised according to the Etruscan precepts testified in favor of all the inheritances that one way or another they left behind.

Greed toward the riches of the Etruscan cities created them several enemies throughout its history. The Etruscans as culture have failed in the fact of not having consolidated their region under a single unified state that would protect them and ensure their survival. In the following article we will address more detailed aspects of their art that is whom better enlighten about the Etruscan Culture legacy.