Ancient Greek art has as main characteristic have a high aesthetic idealism, is not a natural and direct reality representation, but an idyllic and perfect vision of the artistic mind instead, that is perceived and depicted by them in their different artwork platforms. They use the proportionality and balance of the elements and mathematical measures, to represent a sweetened reality. They mastered the representation of human’s figure lines and their sinuosity to perfection; both in drawing and sculpture. The human body for them is the foundation of all beauty and proportion, this trend is called Anthropocentrism. They create art pieces for the joy of the spirit, for the pleasurable feeling of seeing beautiful things.

Greece, is a small peninsula located to the southeast of Europe. Here were born the first ideas that shaped Western culture, in such a way that our knowledge and ways of thinking are a consequence of the philosophy, science and the art of the Greeks. This culture begins approximately in the V and IV centuries, flourishes and develops fully between the 7th and 2nd centuries before the Christian era, not only in Greece but also in other Mediterranean territories inhabited by Greeks. They culture influences extend beyond their frontiers; not only geographical but also in time, since their philosophy of life and artistic styles have proven to resiliently continue to affect one way or another humans through their history and artistic expression.

Though their art relies on nature, manifests it however representing a sweetened version of it; (as mentioned before), tending to the depiction of an idealized world; where simplicity, proportion, rhythm, the clarity and the conceptual unit of work dominate all its art forms. Isn’t that the Greeks were not interested in the surrounding reality, in social and political life, is only they rather to represent their world through the vision and imagination of the artist and the aesthetic standards of the time, responding to represent their surrounding environment and the image of the man in a particular way.

However; despite the idealization of the reality they were able to capture with great skill in their artworks reliable details of nature. Greeks in ancient times accounted for plants and animals, as well as the human figure been depicted with great realism in paintings, sculptures and ceramics, thanks to thorough research of nature. They do not represent it in its raw form, since their philosophy of life; prone to perfection and balance, as well as the streamlining of forms was not in concordance with representing the stark reality as it is. Painters through different periods of Greek artwork conglomerate in art schools and manage to follow artistic standards as the specific geographical canons of beauty and art representation from they were located.

From the archaic period were the figures were represented static, frontal, with a typical smile and almond eyes; until the classical period with the aesthetic refinement and detailed realism develop by this Greek culture; in constant search to find its own personal aesthetic, it can be perceive a great achievement in artistic overcoming, that never stop studying the surrounding nature and considering man as the center of that reality.

A clear example of how they idealized the representation of human figures is the taste developed for athleticism, which served as an inspiration to the Greeks and was very cultivated by these. The sport developed athletes perfect bodies, providing artists their best models. Fascinated by the sinuous forms of the human body, achieved already in the classical stage phenomenal domain of knowledge of Anatomy, thereby allowing them to represent shapes and curves of the body with great detail and realism. 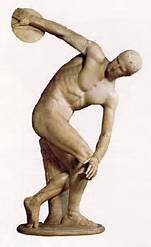 Fabulous sculptures of classical stage show realism and mastery reached as for example the “discus thrower” made by the artist Myron and last stage classic artwork”The Barberini Faun” (of an extreme realism), or the fabulous representation of the sculpture “Victoria of Samothracia” than with outspread wings and the body forward, defying the wind showing great skill in the study of the robes, represented at this stage with incredible detail and natural way.

In the Hellenistic period, relying on new techniques they managed to provide the sculptural works of impressive dramatic strength, movement and contortions that supported the representation of those emotions in moments of maximum stress. The So-called genre (spectacular sculptural works that represent figures in their usual environment in apparent careless positions), they are; Although still based on the canons of Greece’s beauty, more dynamic, have more expression through movements of arms and legs, the wavy hair and clothes beaten by the wind, or the contortions of the figure as in the sculpture of the “youth pulling a thorn from his foot” or the sculpture representing a drunken old woman. 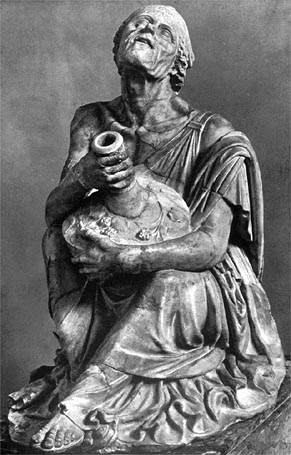 Sculpture in Greek art are explained in an article intended to expand this information and understand the magnitude and importance which they had deposited in these works the concept of proportion, idealism and pure beauty of forms.

– Flowering of an aesthetic idealism that seeks to represent an idyllic vision of beauty.

– Representation of proportionality and balance in the works of art that contribute to highlight the concept of aesthetic perfection.

– It is not of practical and realistic character, but decorative. Seeking the joy of the spirit.

– Concern to represent an ideal vision of the beauty of the human body.

– Representation of nature and the surrounding world with an idealized and sweetened vision of this.

– Greek art is not looking for been an instrument of propaganda, only as an aesthetic pleasure vehicle.

– The rationality of mathematics measures used to represent the ideal proportion in works of art. 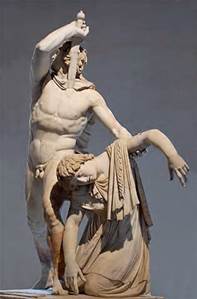