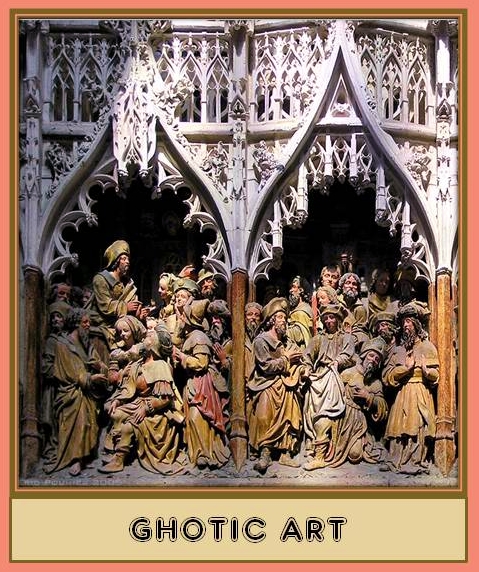 The Gothic art derived from Romanesque art and introduces new ideas, techniques and above all a new way of Christian thought which drive would give the necessary introductory step to the Renaissance. The increase of commercial activities occurring in the period corresponding to the late Middle Ages, coupled with the growth and development of cities, the gradual emergence of the bourgeoisie and a large number of new religious orders, conducive conditions to make it possible as artistic style.

The Gothic art was initially developed as a different style of architecture in the North of France to the year 1140 and continued evolving and spreading to the rest of Europe after incorporating other means of artistic expression such as sculpture, stained glass, fresco and illuminated manuscripts. The realization of painting on wooden boards or panels is not incorporated to the new style until approximately the year 1200 (around 50 years after this phenomenon came about in architecture and sculpture).

The solidification of important elements for their creation won nevertheless against the initial rejection faced and the critics by the Renaissance authors further in time who stigmatized the new style as a threat and artistic debacle of the traditions and values of classicism as they perceived in their rigid eyes and believes. Furthermore the Gothic term was used pejoratively by their opposite’s as a synonym for barbarians as they usually referred to the Goths. Although of course this art nothing has to do with the art of the Goths. The artist and Italian writer Giorgio Vasari popularized the term; and use it as early as the year 1530. This style was severely criticized until it was finally recognized as an art form.

As we mentioned its beginnings dating back to when the choir of the Abbey of Saint Denis was constructed, work in which already are highlighted elements of the Gothic although their promoters do not called with that name. They also highlight these new elements in the reconstruction works of the Cathedral of Chartres after the fire, carrying out for a long period of time the reconstruction work using the Gothic style. It is an interesting example of how was introduced it, in this case on the basis of a cathedral which was originally Romanesque.

There are distinctive elements in the realization of the works done in this style in every country in Europe, even local variations within them were adopted, but nevertheless can be perceive unifying elements with maintain the essential traits that represent it at the general level especially in religious art.

Gothic architecture  art is magnificently expressed in all kinds of civil, military or religious building, private houses and palaces where luxury and proliferates decoration predominate above the intention to achieve height like the cathedrals did and is granted special attention to the construction of public buildings, castles, bridges, fortresses and churches. 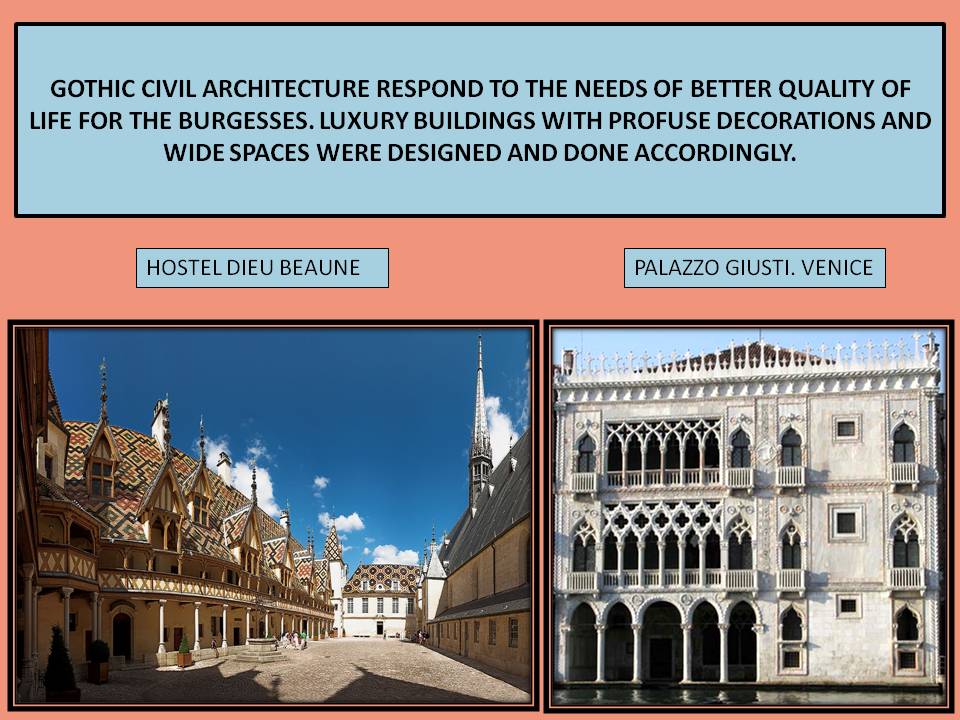 In reality, the highest value of these centuries work was the Cathedral, which possess in the Gothic period urban character in contrast to the Romanesque churches that were made mainly in rural areas. Only can one imagine the amazement of villagers whose majority lived in huts; shock by the glittering decorations and sculptures made in white and polished stone, the feeling of humility that must have they experienced front monumental height and daunting appearance of these buildings. 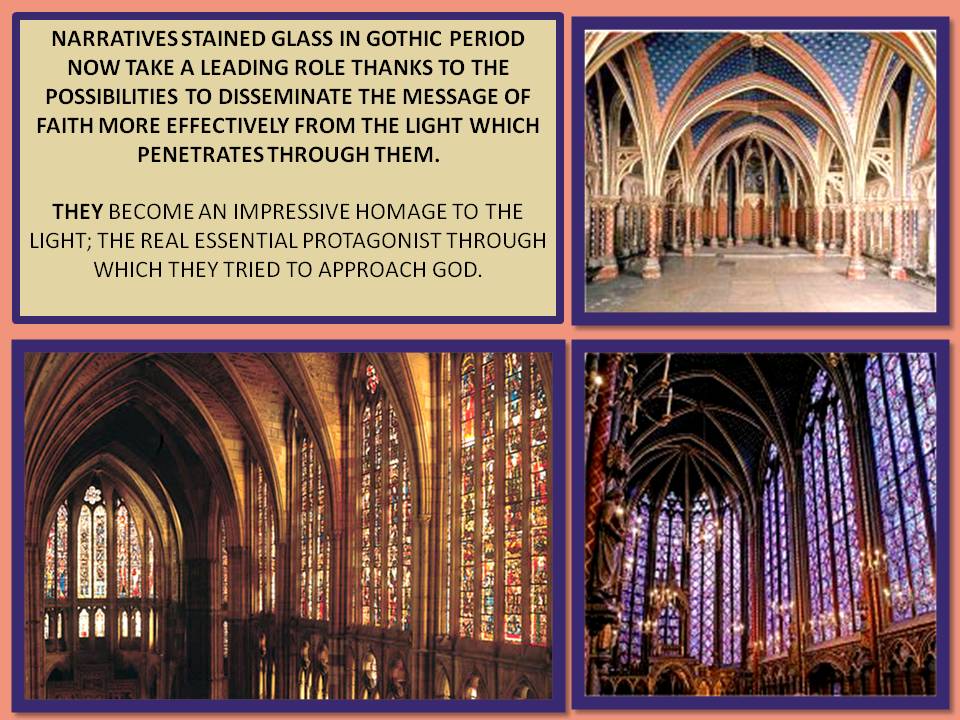 The constructive elements essential in Gothic architecture are:

This extraordinary architecture never ceases to astonish those who contemplate it for being dynamic balanced and dominate in the vertical line, which produces an impression of upward propulsion, accentuated by the acute forms of the arches and the abundance of sharp elements. These buildings reach heights of vertigo in its search for approaching God. The Gothic towers ending in pointed conic geometric bodies; like if they were elaborate lace in stone seems to defy the laws of physics in some regions. 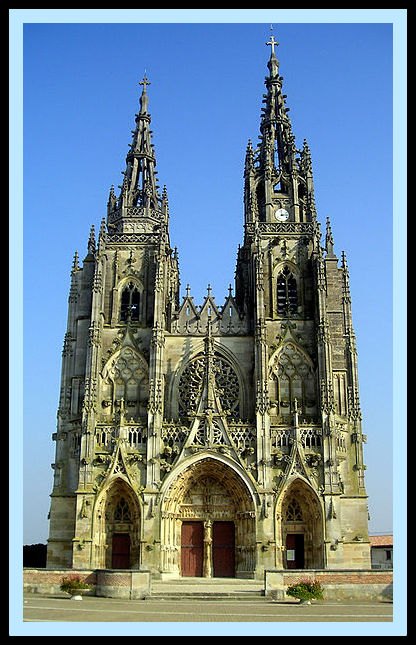 Chief Architect in whose charge was the synchronization of all the constructive aspects straitened to maximize the possibilities of new techniques that put into action what it was a formidable feat of engineering ability. He coordinated the work of craftsmen; that already then had settled in cities and perfected the trades. Their professional knowledge was passed from families to their descendants’ for generations, putting their skills to the service of these construction works for which were highly appreciated; even sometimes exempt from taxes while they were working in the buildings.

The narratives stained glass huge and plentiful that replaced the decoration made in frescoes at the extensive walls in Romanesque churches, now take a leading role thanks to the possibilities to disseminate the message of faith more effectively from the light which penetrates through them. The stained-glass windows produce an hypnotic feeling in the filigrees, the light gives the mystical atmosphere sought to achieve by artists, instructed by the clergy; who was the one to commissioned those stained glass windows that become an impressive homage to the light; the real essential protagonist through which they tried to approach God. 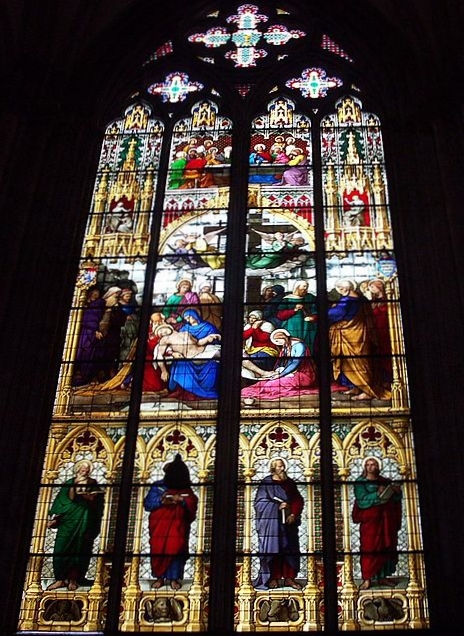 This is one of the most notable features of the Gothic and the one for which is credited and difference. In the realization of them collaborated financially rich and poor, each Guild felt honored to be represented in these Church stained glass windows been represented all the trades; Masons, carpenters, blacksmiths, bakers, weavers, merchants, glassmakers and even the prostitutes.

Among the best examples of stained glass windows are those that are performed in the Cathedral of Chartres, the Cathedral of Notre – Dame de Amiens, Notre-Dame de Paris, Saint Denis and the stained glass windows of the chapel of Sainte-Chapelle; made to decorate the place where was placed the Crown of thorns; one of the relics more idolatrize in an age whose religion reveres and represents in their works of art the martyrdom of Jesus and the descent from the cross as a highly of the Christian sacrifice. The English cathedrals with their over the top and abundant elaborate designs are not left behind. But also the Germans produced exquisite and very particular works that leave the audience stunned to such a construction achievement.

Painting on board in Gothic period appears from the fourteenth century, consisting of small portable altars and altarpieces, formed by one or several panels. They try religious themes, with great finesse of detail in the human figure, but no intension of depth. The painters strive to reproduce the naturalness of movements and gestures with accuracy; a bit exaggerated to the dramatic side though, looking to show piety, humility, stoicism as well as other gestures and postures that help promote the religious message. It was not important the spatial proportions sense, neither is the perspective entirely realistic as long as it was understood. The most beautiful of these Gothic tables is their colorful look, glowing with intensity. The figures clearly established categories among the characters represented by the size in which they are drawn. 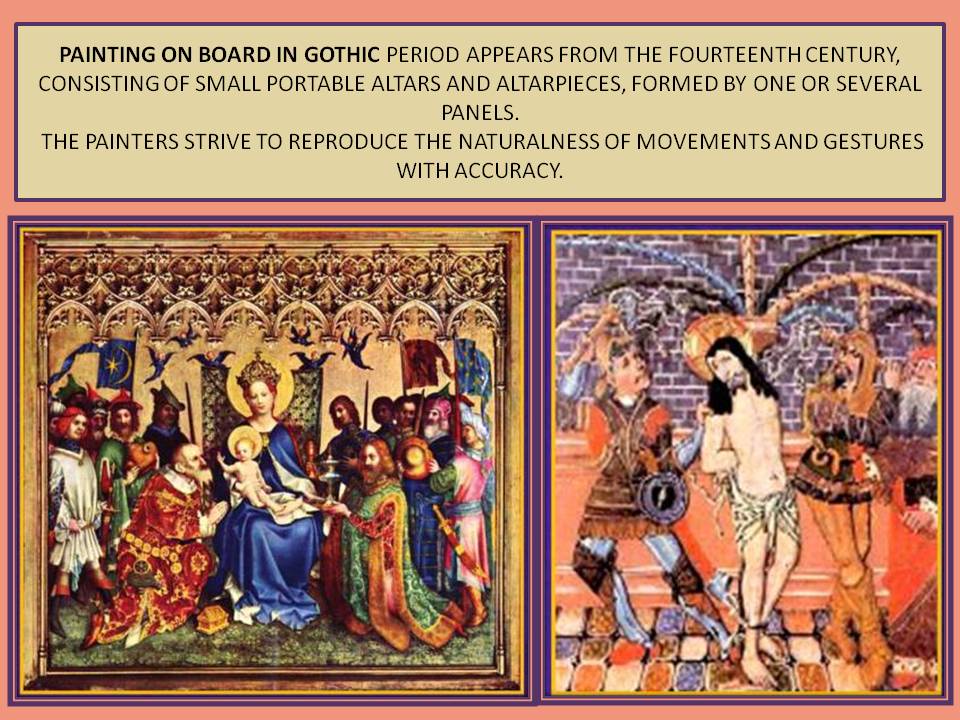 Gothic sculpturemaintains the character of propaganda of the faith as they did in the Romanesque period. Craftsmen and artists represent though progressively virgins, Saints and angels with more expressivity, dynamism and volume noticeably differentiating them from the Romanesque predecessor sculptors. 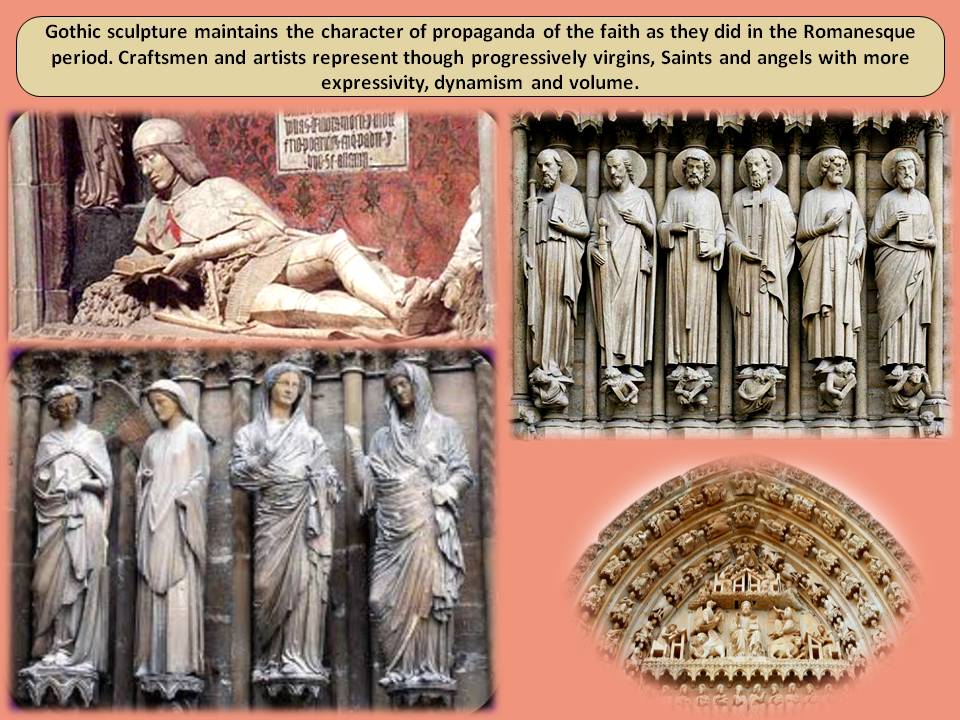 There are also represented Kings, prophets and allegorical figures that fill the interior and exterior of the building, topped by pinnacles, covering the friezes and the archivolts, tympana and all possible spaces to which the figures were added in perfect harmony with the space they occupy. To give idea of the magnitude that reached the sculptural decoration, just know that the decoration of the Cathedral of Chartres in France has more than 8,000 figures. 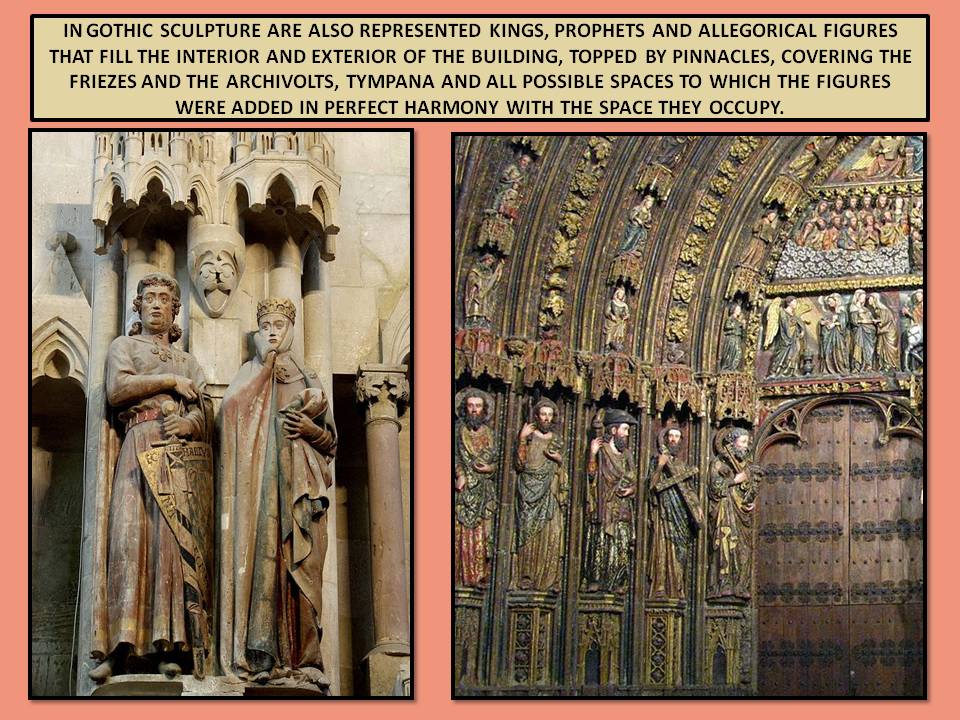 The illuminated manuscripts in Gothic period reached a master and Supreme beauty, many of them despite representing numerous elements at a time in the scenes throughout; manage to reflect the message with ingenious simplicity based on the use of color and the detail of the figures so that it can be understood by those who are aimed; many of them couldn’t read since only a privileged few learned. 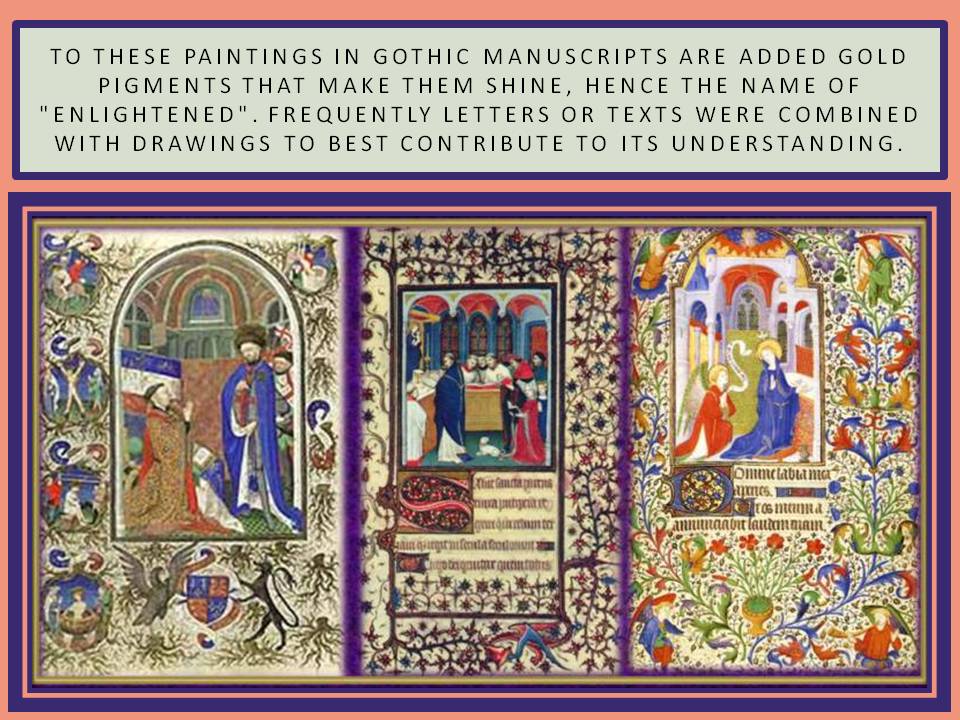 Although initially the manuscripts were only made by monks, artists and people who dominated the technique join the artistic realization latter and were paid by completing these types of works, among them were women. To these paintings in manuscripts are added gold pigments that make them shine, that’s why the name of “enlightened”. Frequently letters or texts were combined with drawings to best contribute to its understanding and differ from the Romanesque manuscripts in the better management of the detail of the figures showing that these artists had knowledge about the anatomy of animals and men that was lacked by their predecessor.

The Gothic European art that included a vast period is established and develops over four centuries, come into being important to the civil architecture and free the other art manifestations of their subordination to the architecture. Gothic artists use the “Transfigured light” of stained glass as a key element, which virtually dissolve the building material elements, getting the viewer in to experience mystical feelings of elevation and weightlessness. This style gave way with his novel perspective of creation and technical skills to the Renaissance period.

Coming soon will be addressed in other articles more detail concerning the architecture, painting and sculpture.