Thanks to the fact of  be left hidden in tombs and in special environmental conditions the scarce Phoenician paintings who are still remaining today show us a glance of what could have been this plastic expression; just recently brought to light again by art historians and archeologist. There is not much what has survived in reference to the Phoenician painting. Limited examples found correspond in the majority of cases to the Hellenistic’s period tombs decoration. There isn’t some good information either in the Greek or Roman classic authors that can illustrate somehow details or at least a vague information about the characteristics of the painting of the “People of the Sea” the name by the one they were called by ancient contemporary cultures in some written inscriptions found.

Unfortunately, no accounts survive describing the Phoenicians’ owns statements about their paintings either. It is a fact though that they received influences from other cultures like the Assyrians, Persians, Etruscans, Greek and Egyptians because they do commercialize with them or were under their domination at some point.

The funerary painting of steles, votive items and walls painted found in the Phoenicians tombs’ shows how they enjoy painting in polychromes tones in some cases or even only in dual tones; like red over the ochre of the stone walls. They depicted different elements of their life as important as religious, social, funerary and their everyday routine like navigating or commercializing. 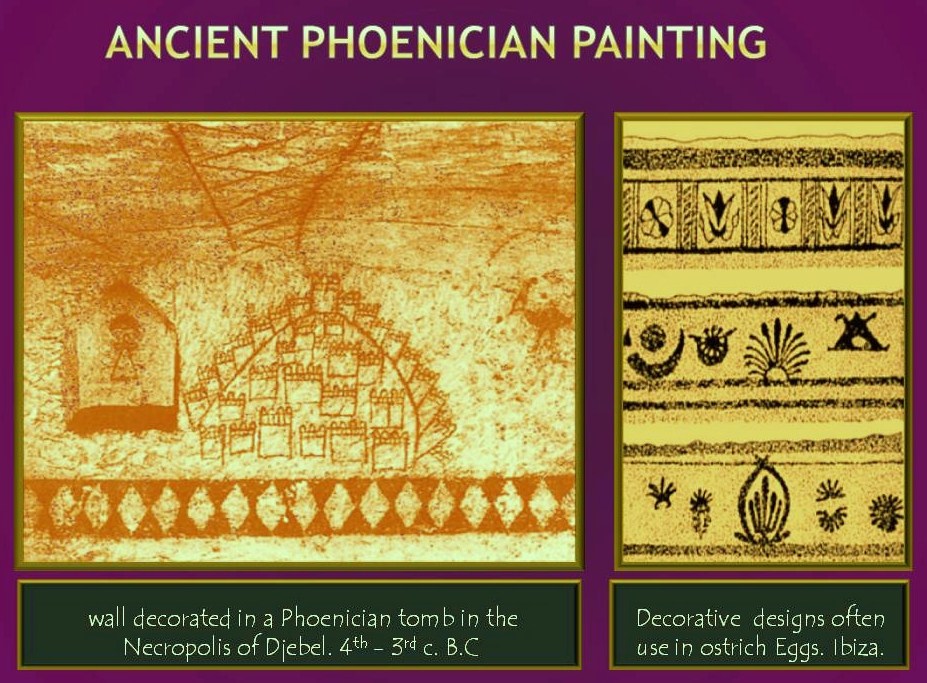 They represent as well nature in figurative drawings with predilection of outlined figures; as well as combining outlined figures with the use of colors inside them. Phoenicians also make paintings in which the figure’s outlined emphasis is not evident, in this case were almost free of distinctive trace of them.  This type of paint has been found corresponding with the Hellenistic period or from the times before as well; when the Greek influence was not yet imitate.

Patterns conformed by sequence of flowers, petal or vines decorate the walls, been garlands a frequent motive found in their paints as well as some animal with or without the human figures present. Those zoomorphic figures have not been found so often in the remains discovered but since they were people that live so close to the sea, creatures from the oceans like fish, corals and octopus much has been represented as well somehow.

The colors applied over the round sculptures or to decorate ostrich eggs are showing the presence of both forms of painting (color and outlined). Some paints found in archeological sites like the one in the Sicily region are good example of that.

Phoenician painting was not, like Egyptian, displayed upon the walls of temples, nor was it, like Greek, that use pictures for the decoration of houses. It was employed to a certain extent on statues, not so as to cover the entire figure, but with delicacy and discretion, for the marking out of certain details, and to emphases certain parts of the design. The hair and beard were often painted a brownish red; the pupil of the eye was marked by means of color; and robes had often a border of red or blue. Statuettes were tinted more generally; the vestments were sometimes colored red or green. Some terracotta statues that had survive still show remnants of the pigments used. 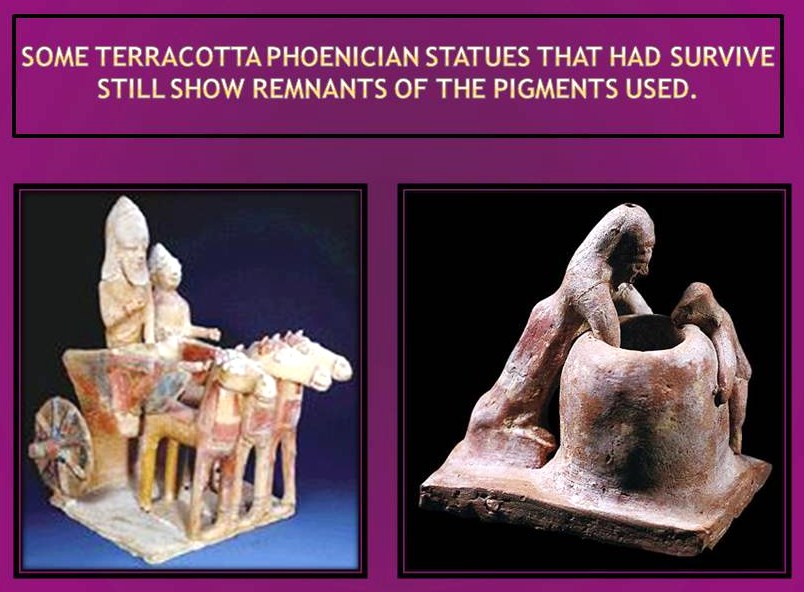 The better approach to proper painting which was made by the Phoenicians is their vessels made in clay, terra-cotta, and alabaster. Here, though, the ornamentation was sometimes merely by patterns or bands, there was occasionally real effort to depict animal and human forms, which, was not by the way very successful but still possess considerable interest.

New researchers based in report of chemical analyses showing that 8th-century B.C. Phoenician ivory artifacts are containing metal traces that are invisible to the naked eye. This Ivory sculptures seems to have been originally painted with colorful pigments, and some were decorated with gold. Research determine that these metals are found in pigments commonly used in ancient times to elaborate paints, such as the copper-based pigment known as “Egyptian blue” or hematite the iron-based pigment they also elaborate. 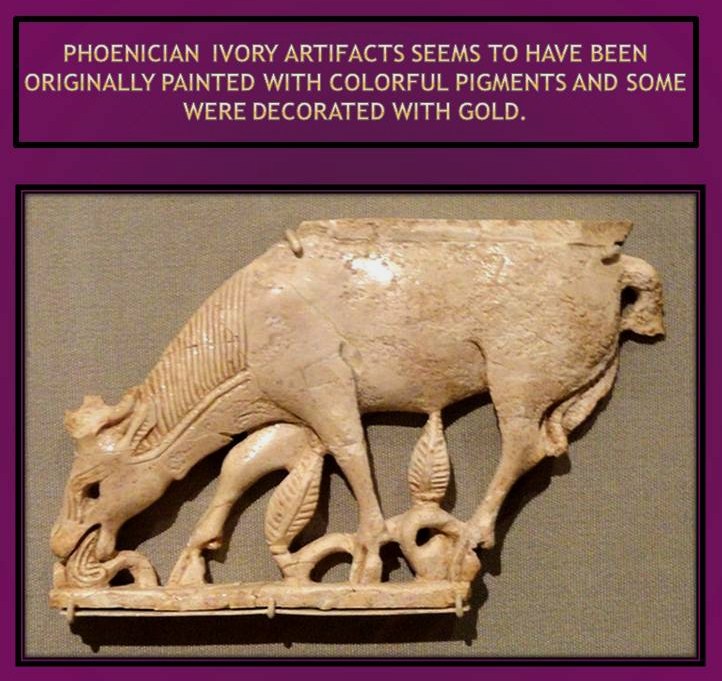 The Phoenicians were buried in tombs in situ and those funerary chambers were decorated following their tradition and believes, not meaning they necessarily were done to honor the specific dead person buried or the gods since the variety of theme found in the region not seems to show so. Is not clear yet what was the belief of the Phoenicians about the afterlife. Those paints are applied direct to the wall must have been difficult to do so with the irregularity of these walls. Other paints examples are in the ostrich eggs but in both cases the time had taken its toll in the deterioration they suffered.

The Phoenician paintings before the Hellenistic period do not use perspective showing the figure drawn in strange positions and sizes in relation one to another. The themes were more inclined to represent figurative elements with geometric patterns framing the scenes in the footer; they depict their fortified cities, traditions and religious rituals in which the human figure was not excluded in those paints. 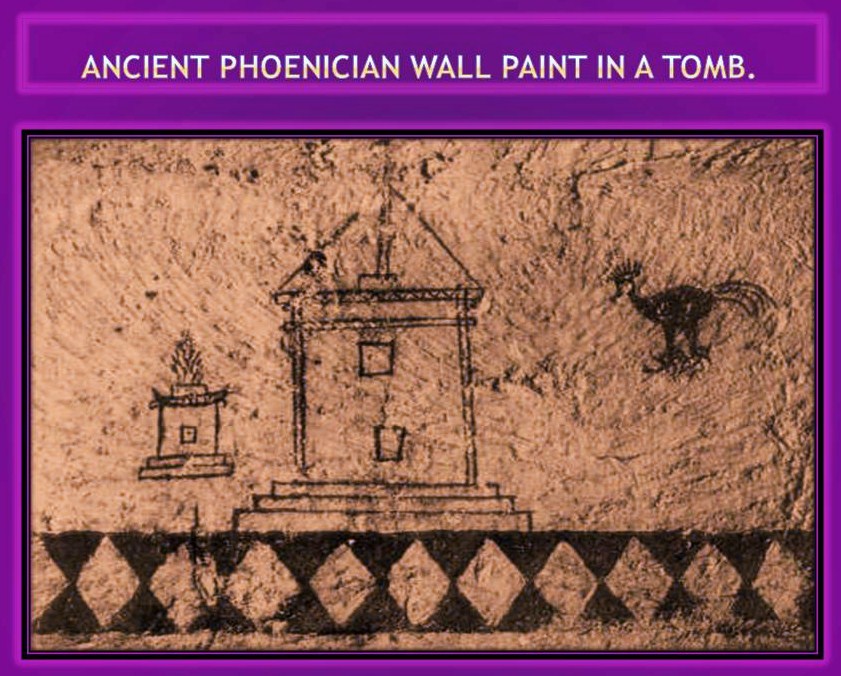 Other themes used in Phoenician painting corresponding to the Hellenistic period like mythological Greek characters, heroes, and banquets. They form part as well of the scarce paintings found but from this period the outlined detail of the figure faded away; probably with time since they are dating from 2nd -1st centuries but could have been the artist conscious intention as well.