Ancient culture and art of Celts

Ancient culture and art of Celts

Not much about the ancient Celts was known during centuries, except for the Greek and Romans chronic’s written that had survived where they consider the Celts as fearsome people and dangerous barbarians. The culture and art of Celts in ancient times it is today because of that reason sources of numerous studies by multidisciplinary teams of specialists.

The people who are call as Celts have deep roots in European history, which can be traced back for at least twenty-five centuries. Those who spoke the Celtic languages in Europe as far back as the pre-history period of men up to the modern period are considered as Celt. However also Celts are the ancient peoples whose language is not Celt but are sharing cultural and stylistic similarities with people who indeed speak Celtic languages.

The Celts leave no texts to rectify the Greeks and Romans prejudiced statements left for the posterity by the Classical authors because they do not count in ancient times with written language, or literacy of some sort for a long time, at least not any known so far. They culture and tradition pass through the next generations for centuries with the oral prose, stories about heroes, chants, symbolic representation in art of beautiful characters, tattoos designs as well as diverse other graphic representations like relief in stone and many different objects. 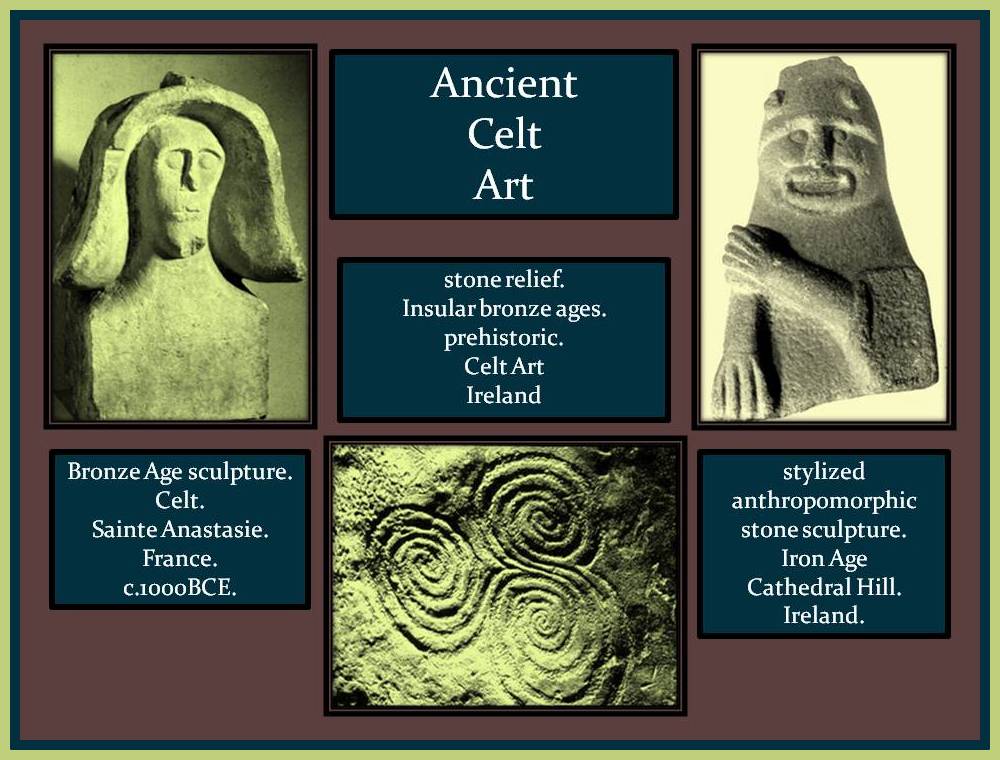 The ancient Celts; who can now be seen fairly different from the barbarian people they were depicted before were at some point the dominant culture in Europe and established with their people and traditions in great part of that continent until they were displaced by wars. Today the new discovers shows them as an intelligent, complex, successful and a wealthy conglomerate of societies and tribes, who came to play a crucial role in the conformation of Europe, although they didn’t have a conscious as a nation themselves.

Celts in ancient times were polytheists and very superstitious people. Archaeology has given this people a voice today through the physical traces they left behind, revealing many new aspects about Celtic society, economy and religious practices not mentioned in the existing classical Greek texts. The earliest recorded Celtic civilization as new archeological discovers point it can be as early as 2000 BC communities with Celtic origins already existed in Britain, Ireland, France and Germany. 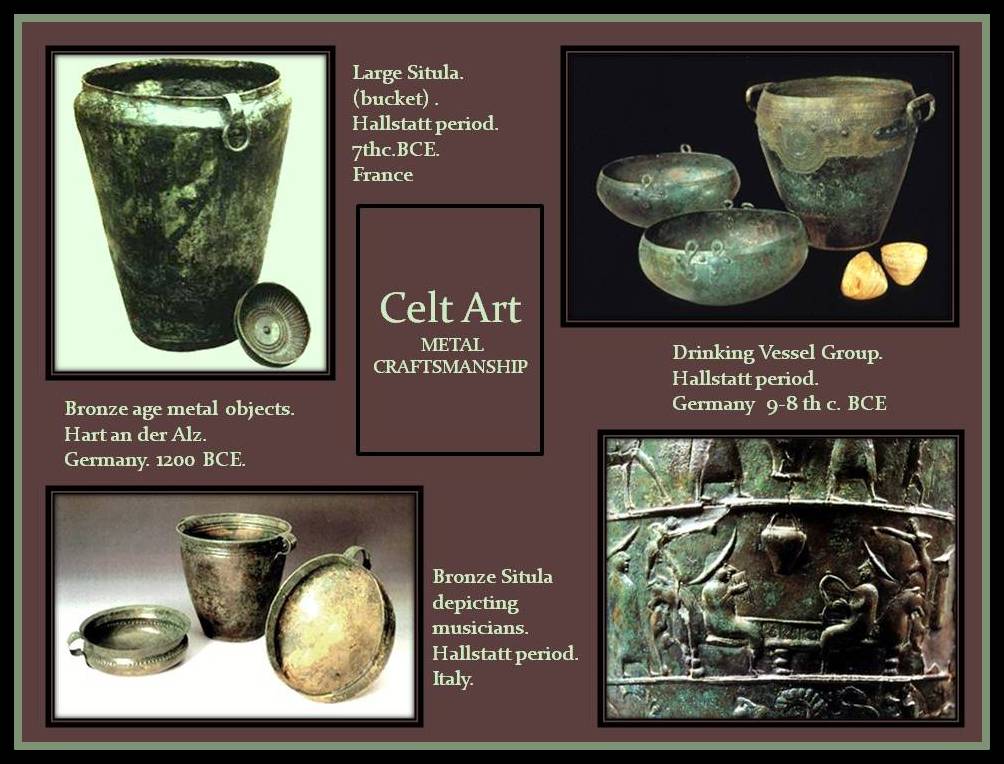 The ancient Celtic people were basically farmers and warriors who settle in high mountains, worshipping the natural aspects around them: the sun, the moon, the stars and the Earth Mother with all the seven principal elements that were represented in any medium possible by their artists, blacksmiths, and craftsmen. They themselves are said to have practiced shape-shifting, so it is not unusual to find their many gods portrayed as having animal form, or even only animal body parts.

The seven created beings of the Celtic world are all featured in their artwork frequently in abstract forms.

Ancient Celts art is characterized by the horror vacui applied to the designs, though minimalist artistic representations are also sometimes encountered. They are full of colors and plenty of imagination reveling intricate designs, geometric and stylized elements that were use as inspiration later by Christian’s artists in the confection of outstanding and beautiful illuminated manuscripts in the Medieval Celtic Art or in the Insular Art period by Celtic monks.

The earliest artistic remnants founded of the Celtic culture include many stylized bird, animal and human representations, crafted with such mastery, detail and fluidity they really give the impression of been full of life and movement. They produced sophisticated metalwork, stone and wood carving and decorate these objects with a variety of geometrical, knotted, and spiral designs, stylized animals and human figures. 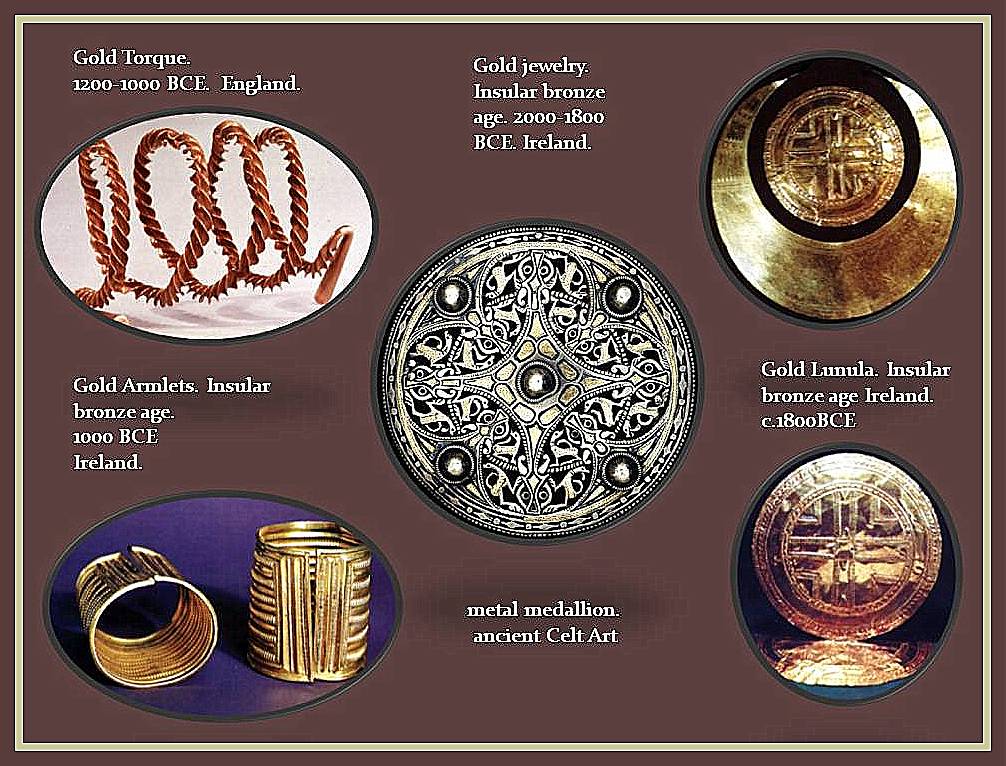 Celtic art is ornamental, avoid straight lines and only occasionally symmetry is used. The stylized figures allow combining tricky ways of representation that can be appreciated different depended of the position in which the spectator is observing the object.  Their art often contain complex symbolism in which patterns and number and their repetition conform the whole figure design.

The geometric patterns are under the rounded lines control, and endless variety of swirls, curves, and other shapes, sometimes with a vaguely natural form appearance suggesting a much undefined plant or animal- like form instead of a natural and clear defined one. But it was characteristic of the Celt to avoid in their art all exact imitation of the nature world, they tend to stylize them as mentioned before, representing the abstract concept, reducing their designs for instance to pure decoration.

This intricate designs and patterns were applied to weapons, ornaments, and household of all kinds, in gold, bronze, wood, stone, ceramic and possibly textile and fabrics as well. 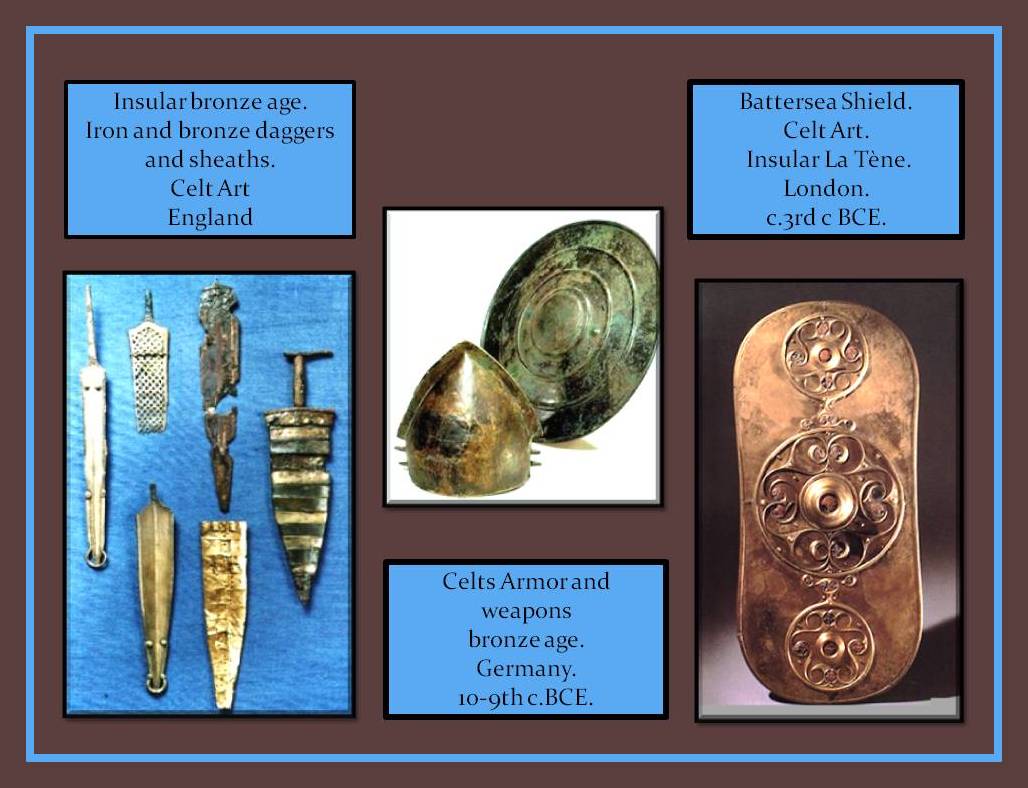 For the purpose to better study the Celtic art and culture, have been subdivided in different periods by multidisciplinary team of specialist. New knowledge about this culture is currently surfacing from the archeological excavations allowing this nomenclature be more adequate. The new discovers allows a better understanding identifying the differences between artifacts and their relation with the location and time of creation.

Different periods of the Celtic art and culture:

No architectural remains have survived intact from the earliest ancient period of the Celts although recent archeological studies in a place called Castell Henllys have help to reconstruct some aspects about the round houses builder by Celts in the Bronze Age period.

In a place near Salzburg, in Austria was discovered at Hallstatt, relics from about 750 to 400 B.C portend in some cases a high standard of civilization and considerable commerce were: amber from the Baltic, Phoenician glass, and gold-leaf of Oriental workmanship have been found there. Iron swords were also in the group; whose hilts and sheaths are richly decorated with gold, ivory, and amber. Hallstatt culture produced art with geometric ornament, but marked by patterns of straight lines and rectangles rather than curves. 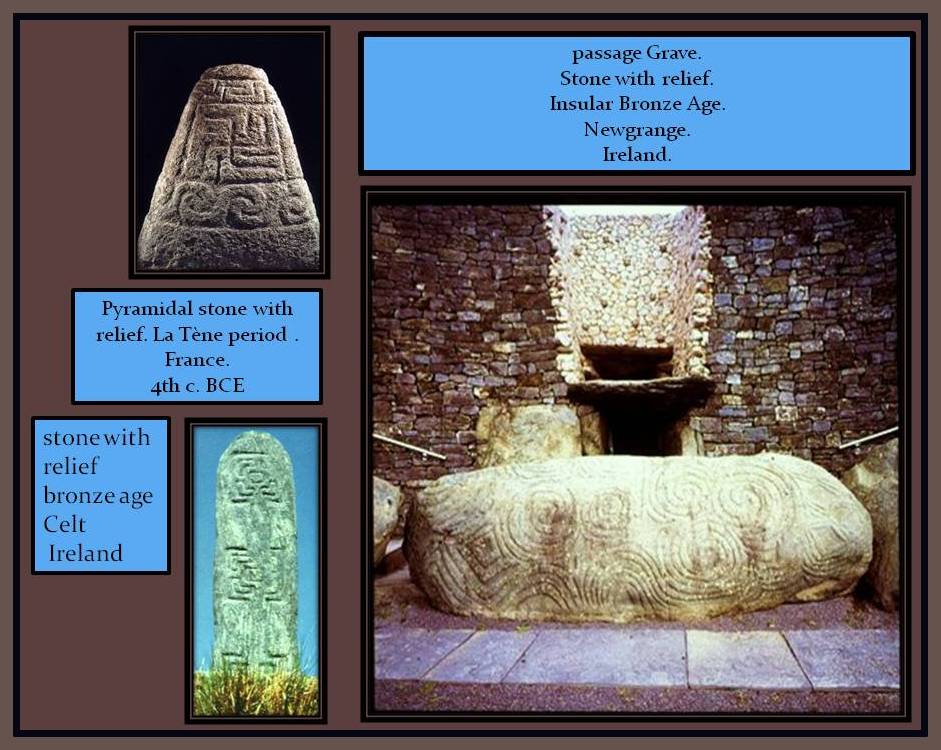 The Enamel-working was an example nevertheless of the mastery developed by Britain Celts people before the Romans conquest took place, which means that some skills like this one were developed by them before they even get any contact with the Romans. The Ireland Celts art remain for a long time strong and pure because not Romans or others cultures invade that country for centuries. 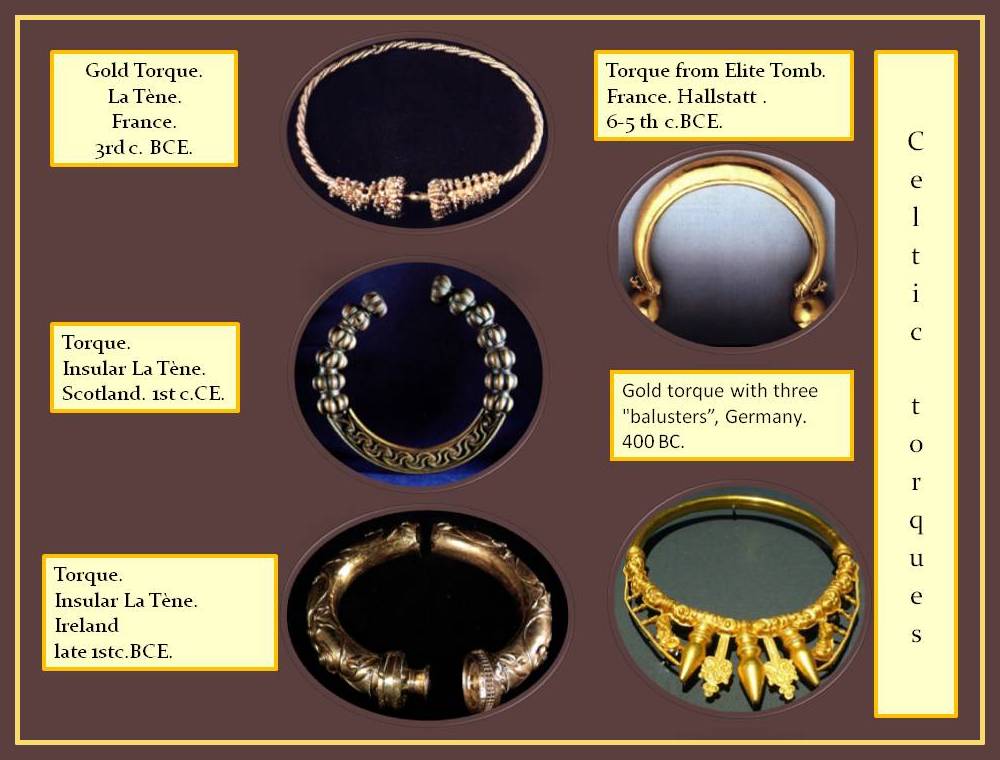 The ancient Celts culture and art along their line of evolution in no way seem to have invented any new ideas, they had an extraordinary aptitude nevertheless for picking up knowledge from the different peoples with whom war or commerce brought them into contact, they receive artistic influences from the Etruscan, Greek, Roman, Phoenician and oriental cultures and this wealth in techniques, styles and craftsmanship skills was widely taken advantages of by the Celts who mastered all of them with surprising abilities, passing to their successors a baste cultural and artistic inheritance. 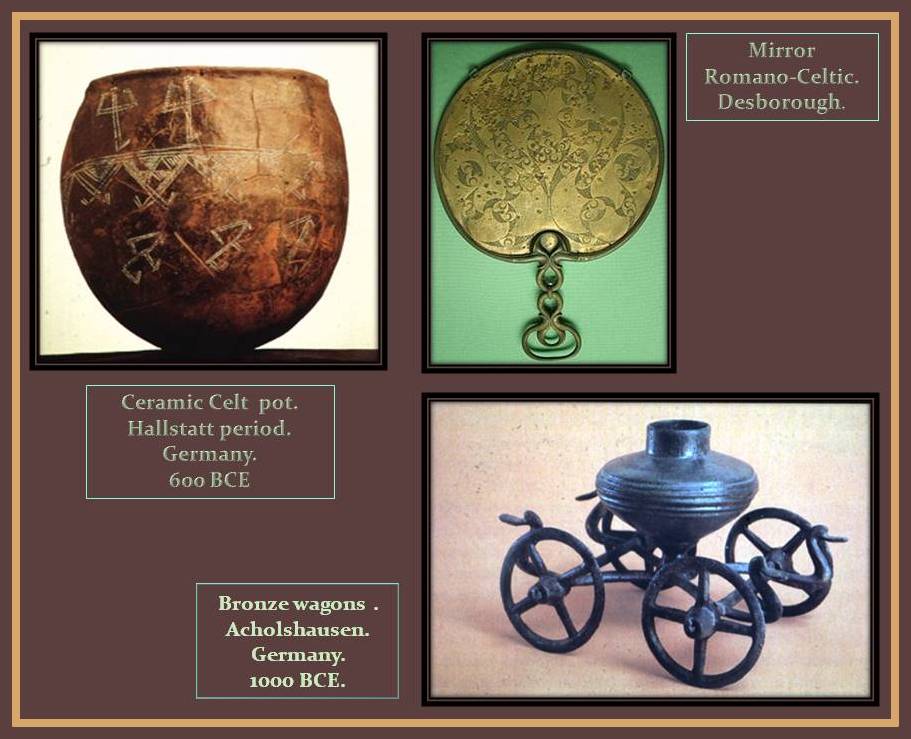 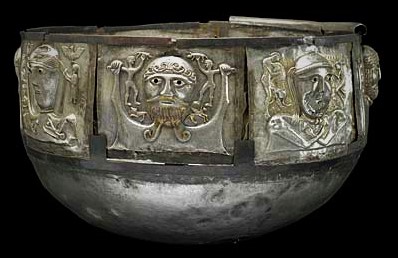 The Gundestrup Cauldron. Courtesy The National Museum of Denmark.