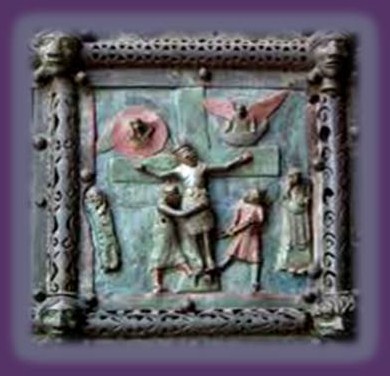 In early Romanesque period Byzantine influences were strong and were the one adopted in Europe as favorite, in which the decoration of caskets for jewelry and mementos, showed great mastery in the finish, careful detailed figures against the background as well of great management  locating  those figures, who were very well adapted to the shape of the container. Most of these pieces in that early time of Romanesque were made in gold and silver following the Byzantine craftsmanship style.

The metal work urban industries in the middle and late Romanesque period finally get rid of the Byzantine influence and star working in their own forms and styles that was favorer with the introduction of new techniques. Even when the Church still order the majority of the work, the popular savor was widening and have more range and more different pieces start to be produced. 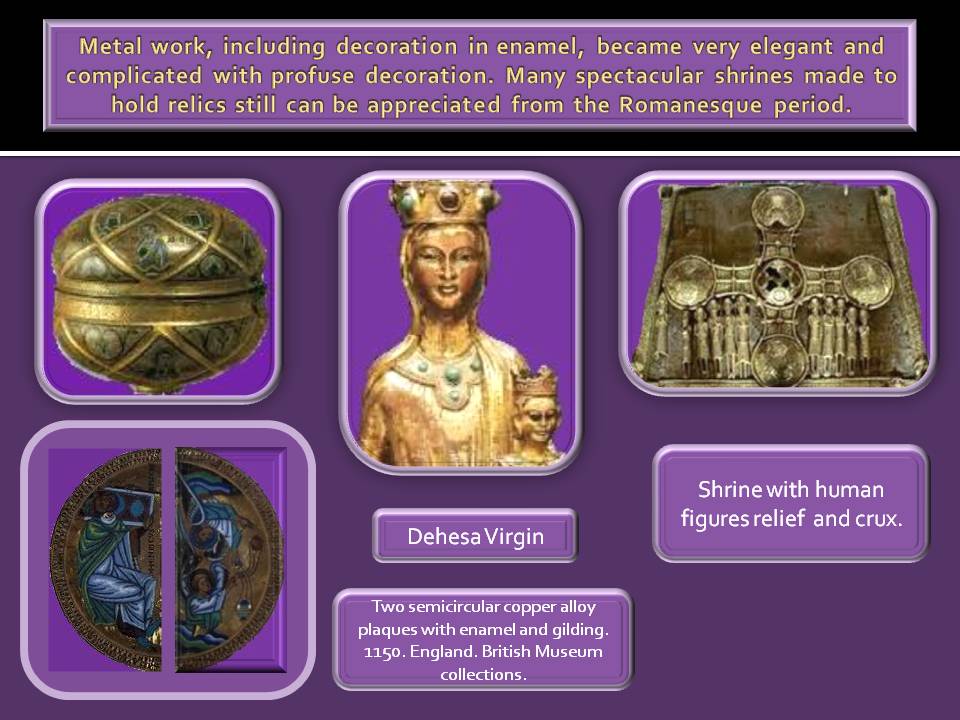 Use of enamel in Romanesque metalwork.

The work made principally in gold was replaced gradually by some pieces made in cooper and bronze;  to which a process of enameling applied over them made possible a more unique work and at the same time a more diverse and easy to produce type of metal work pieces. With enamel surfaces a definitely less expensive method than the Byzantine traditional workmanchip. Enamel was gradually overcoming the metal craftsmanship but was not less beautiful, was definitely not coarse nevertheless; since the new technique favored a different approach to good quality pieces without the costly precious metal gold.

Precious and Semi-precious gems were used to highlight this pieces and since the cleric was the principal recipient and payee and were the one that could afford such sophisticated metal work, the Cathedral and Church use them in religious ceremonies and to keep relics; but also they had others uses;  less ecclesiastic and more on the practical side, in which the religious theme were however still present. Occasionally glass was also cut and insert as gems. 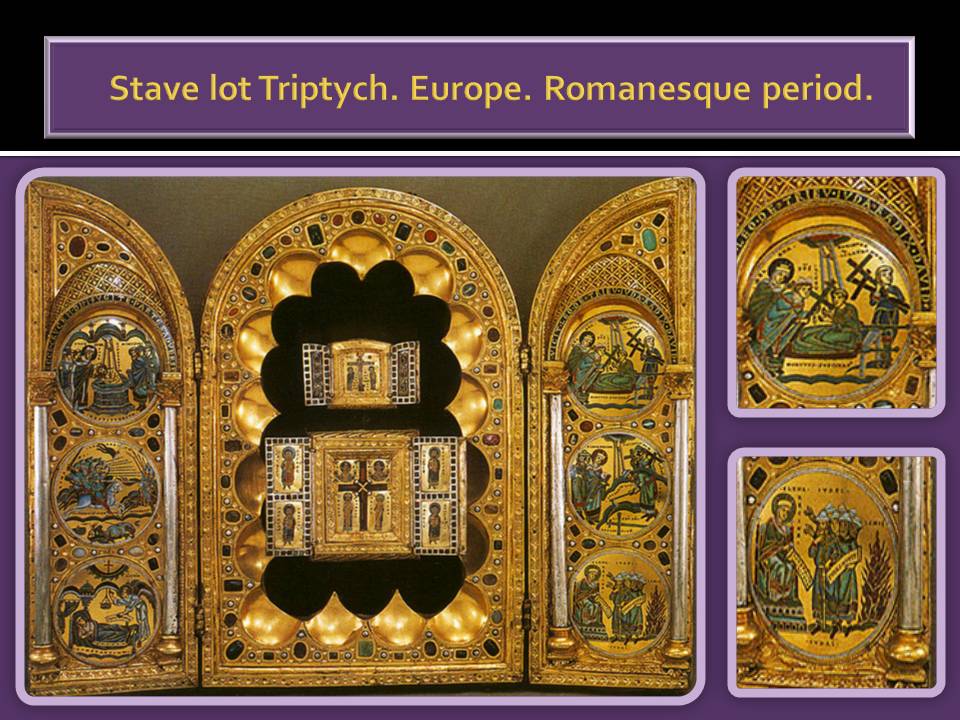 Metal work, including decoration in enamel, became very elegant and complicated with profuse decoration, and many spectacular shrines made to hold relics still can be appreciated in our days. Although large reliquaries and  frontal altar’s were built around a wooden frame, the smaller caskets were still done using metal and enamel. Some secular pieces, such as mirror cases, jewellery and clasps made for the rich people, nobility and important political figures,  show the mastery that was achieved in that period in medieval  times.

Also have been conserve; despite the abuse this pieces affronted trough times due to wars and political clash, important pieces made during the Romanesque Period like:

All those objects show a craftsmanship that represent the transition and gradually enriching of artist forms occurred in this period. The ornamentation of this artifacts go from the rudimentary decorations in early Romanesque period to finally evolve in a sophisticate style that will be reached in Gothic period.

The craftsmen and artisans of Romanesque fill their metal work with matters and images, with codes of meaning, symbolic representation of the transcendent importance the cleric award to their religious ideas and Chatolic Fay. Most of this metal work, as well as other artistic work made in different materials; were in the majorities of cases destined to promoted ecclesiastics believes and to propagate the sacred word. The majority of people could not read, the images in those metalwork contribute to identify better the messages. 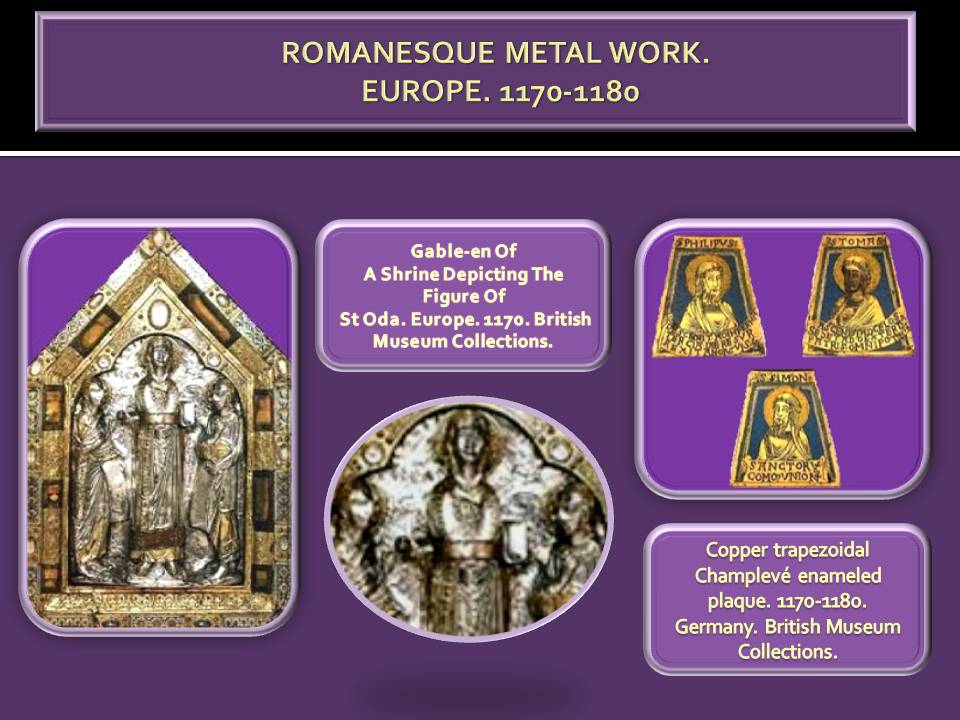 Chip-carving methods of metal craftsmanship employed by German jewelers; as well as other
techniques develop and executed by Celtic Metal work craftsman included:

The main contribution of Celtic art to Romanesque Period iconography lies today in its abstract design, which can be incorporated into metalwork, carving, and fabric and so on; their figurative tradition was generally too abstract for use.

Some of the best known Examples in Romanesque metal work pieces are:

–          The bronze doors, a triumphal column and other fittings at Hildesheim Cathedral. 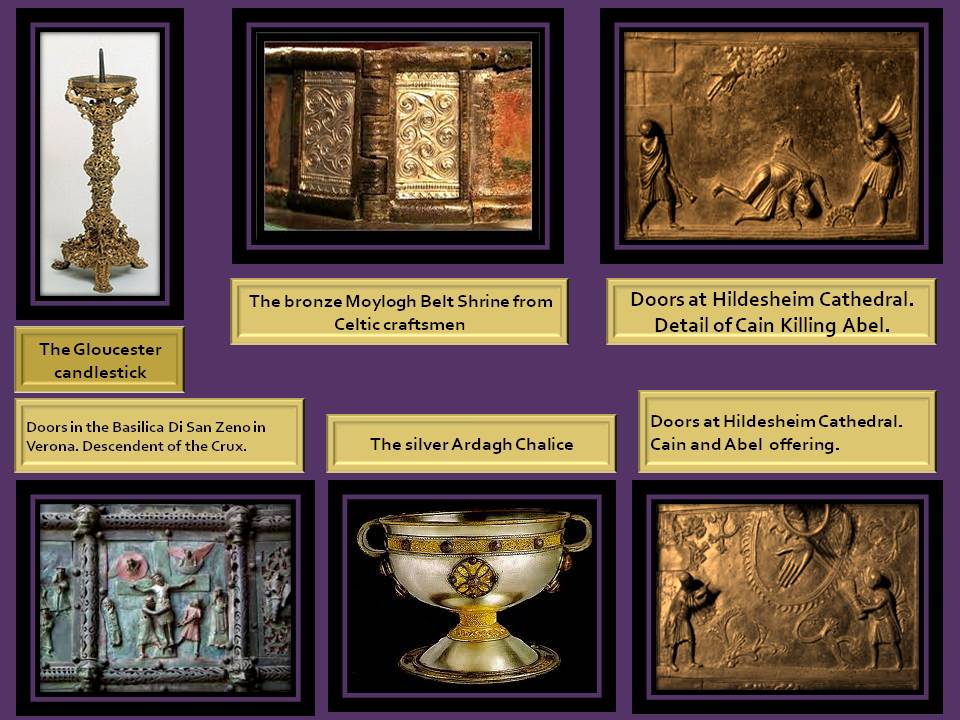 The beauty of these Romanesque Period Metalwork, done with such excelent craftmanchip are a legacy about their craftman abilities, but also a tangible testimony of the history of their Fay, they constitute in a way an open book of knowledge from what we can now absorve in a beautiful way the inheritances they leve for us today.