Art of India in ancient times 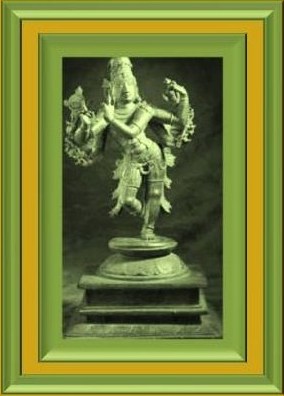 Art and culture of India in ancient times.

India is located south of the Asian continent. The name India is derived from the native Word sindhu which means River and that originally applied to the Indus, the large watercourse that crosses longitudinally to Pakistan. The Hindustan Peninsula currently consists of three countries:

The inhabitants of this region on the other hand called themselves as “Bharata country” referring this term to a mythical ancestor of the lineage of warriors with that name. Three rivers allowed the settlement and development of civilization in this region so it has been for the India considered sacred. These rivers are:

The India has a vast territory which has hosted for centuries to a conglomerate of different cultures, religions and traditions from many other places that have helped define his current culture. The great Himalayan mountain range separating the flows through the Persia and Tibet region, but especially in the Mughal period the India was influenced by the culture of Persia whose art in general sense has contribute to shaping the art and culture of the India as we know it today. From Persia they assimilated techniques and styles that enriched its heritage as the Royal Mughal patron of the arts.

The art and culture of India has thus multi-ethnic and multicultural features that have developed outstanding nature and religion, but equipped with mysticism and sensuality as well as strong imagination from their fusion with other no less imaginative and mystic cultures. It can be said that  because  India has one of the most complex societies, whose age-old powerfully mix of races, cultures, traditions and religions had nutrient its history is consider a intricate but incredibly interesting task  the study of the art of this country. 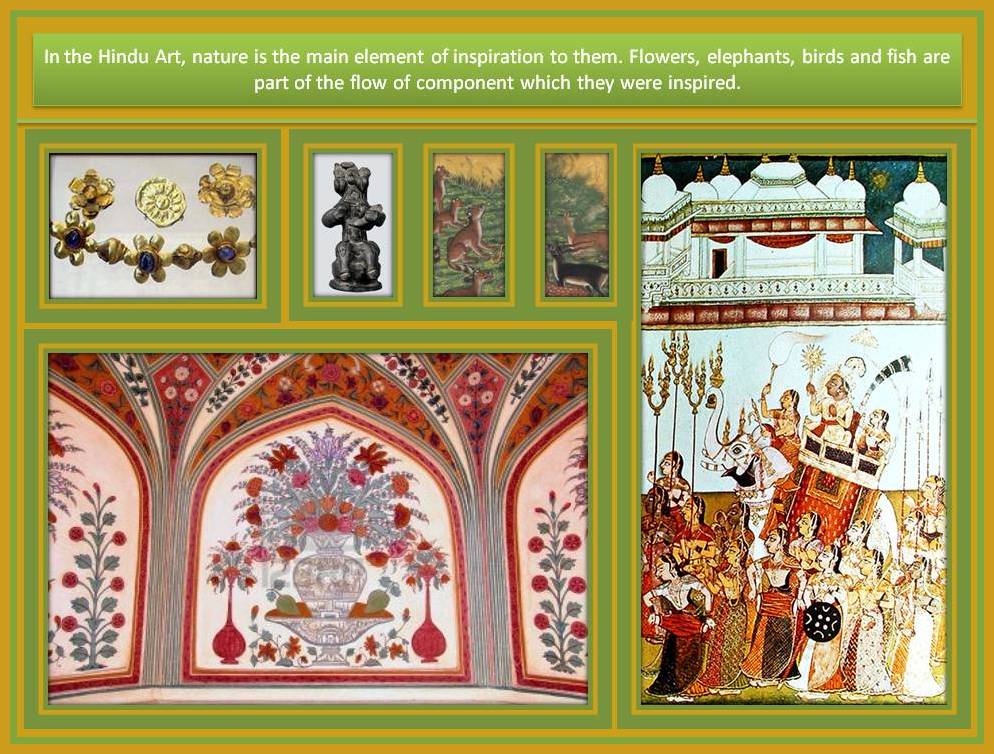 Their art is defined as sacred or holy. Through highly sensitive artistic representations and symbols is gives the possibility to identify fully with them if this observer has grown up and lived in this culture, for those which no, therefore is not very easy to understand fully the message of the work since this often is veiled in them and doesn’t seem at first glance to have messages or religious content. A vivid narrative compositions style conceals the devotional intent under the guise of dynamism, frivolity or even eroticism sometimes. 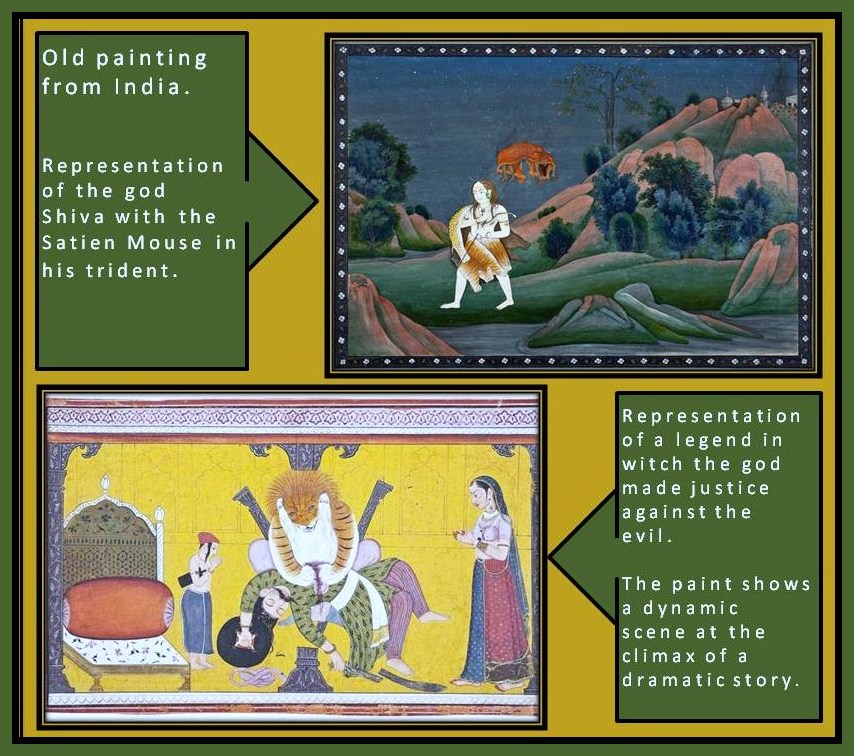 But make no mistake; not by the fact of not fully understanding these veiled messages the observer will stops seen the beauty and perfection of these works; since they use one of the best vehicles to do so,, the sensuality that is universally lived and perceived by everyone. Sculptures, paintings and decorations in their famous textiles intended for worship or for simple daily use are made with a colorful dynamic narrative style of apparent frivolity and sensuality.

The ancient Indian art and culture adopt a theory of beauty which is very different from that prevailed in Western culture by the clergy; that teach artistic and cultural dogmas to follow with clear emphasis, without ensuring or conceal their main purpose and were the artistic works has been expressly commissioned by the Church in regions controlled under its power.

Indian art enhances the intrinsic beauty of the materials used, applying harmoniously also vivid and contrasting colors to highlight elements that accentuate the beauty of the piece since this is an important element in the realization of their work. Primordial elements for humans, as it is the case of the feelings, the eroticism, hope and love are appreciated more effectively in works of art when beauty is the prime factor in them. 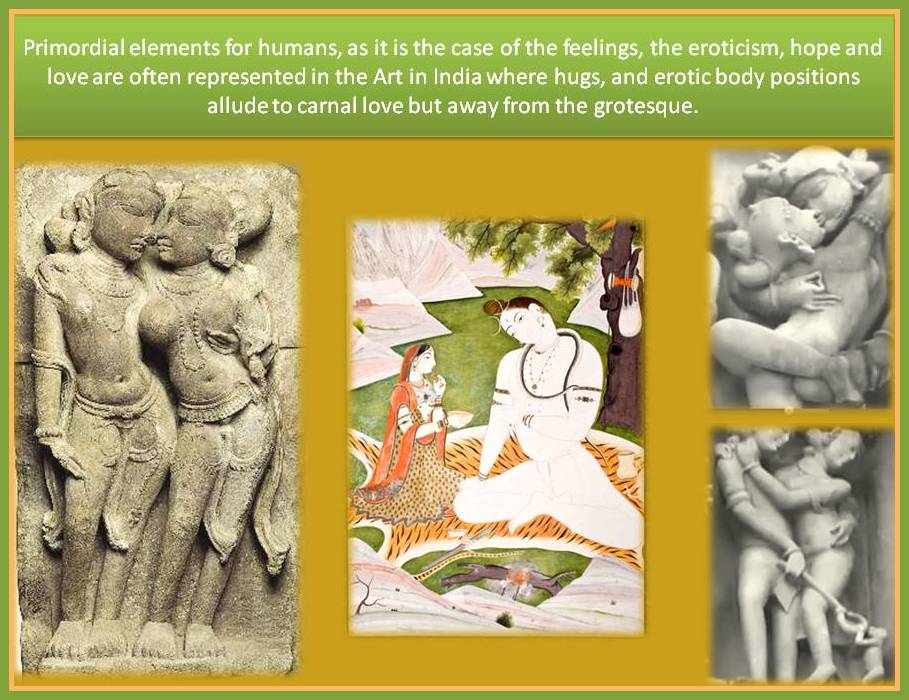 Therefore the Hindu not step overlooked this aspect about beauty which nature itself; since it’s the main element of inspiration to them. Flowers, elephants, birds and fish are part of the flow of component which they were inspired. Another important issue for them is the love between gods and their loved ones; this aspect is expressed with refined sensuality; Hugs, and body positions allude to carnal love but away from the grotesque. They also represent divine battles again evil by their gods and mystics monstrous been surrender or destroyed by this divinities being.

Among the people who arrived and settled in the Hindustan peninsula are:

– The aborigines of dark skin; ancestors of the Dravidians.

Coming soon new post about India will refer to the most significant manifestation of it’s art and culture along  the history, like painting, ceramic, sculpture, architecture, textiles and metalwork.

Link to this post!
📂This entry was posted in Art of India in ancient times. 📎and tagged hindu sacred art multi-ethnic and multicultural features in Hindu art sensual themes settled cultures in the Indostan peninsula history

3 Responses to Art of India in ancient times