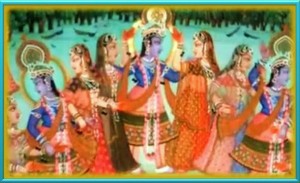 When it comes to the India’s paint we all should keep in mind that this is a very vast region that received influences from other cultures, Indian artist develop their art and general culture traditions according to historical moments and religious situation that unfolded differently in each region.

At different periods in the long history of ancient painting in India, we see that the result of this amalgam of cultures, religions, politics and social castes, as well as the performance of economic development in each region, defined pictorial trends and development of different techniques according to their origin, it also offers some common implementation features.

Cave paintings representations traces have been found at Bhimbetka; close to the Bhopal area in approximately thousand caves that establish the emergence of ancient paints in India. The date set for these caves dates back to the Paleolithic period (7000 BC). In that remote time the inhabitants of this area were still forming the bases of the civilization and however already  pictorial realization are done on the walls of these dark caves used also as protection from the weather and animals.

Depictions of stylized human figures using simple strokes in their paints, shown how they participate in hunting activities, which according to their beliefs conducive to good hunting and the abundance of food. The shape of the animals is done more robust also using strokes that try to give a feeling of volume, being the themes throughout predominantly with animal figures. 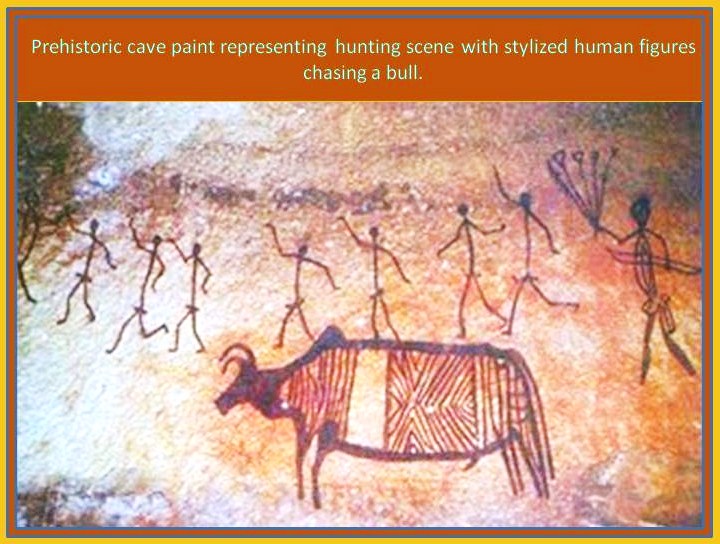 These paintings also represent dances, scenes of births and burials, propitiatory religious rites were they supplicate to their ancient gods been favorate with better weather conditions that would allow proper food recollection and hunting journeys. The typical fauna which chronologically corresponded with this period of prehistory in India were widely represented, where elephants, Tigers, rhinos and bison can be appreciated in these paintings which are still preserved.

Religious believe representation in the plastic art of ancient India.

The painting workshop in India was organized according to different levels of specialization and expertise. The work of artist was determined by the family tradition or belonging to a particular caste and used to be anonymous in those ancient history periods.

In the ancient painting of India especially in the flourish period of Hinduism and them further on; often deities are represented with multiple arms, especially when they are engaged in combat using its cosmic form for the destruction of powerful forces of evil. The multiplicity of arms highlights the immense power of the deity and their ability to perform various act or achievement involving courage, skill, or strength at the same time. Indian artist leans to representations of this kind of multi limbed creatures since they constitute a simple and also effective means of expressing the omnipresence and omnipotence of a deity. 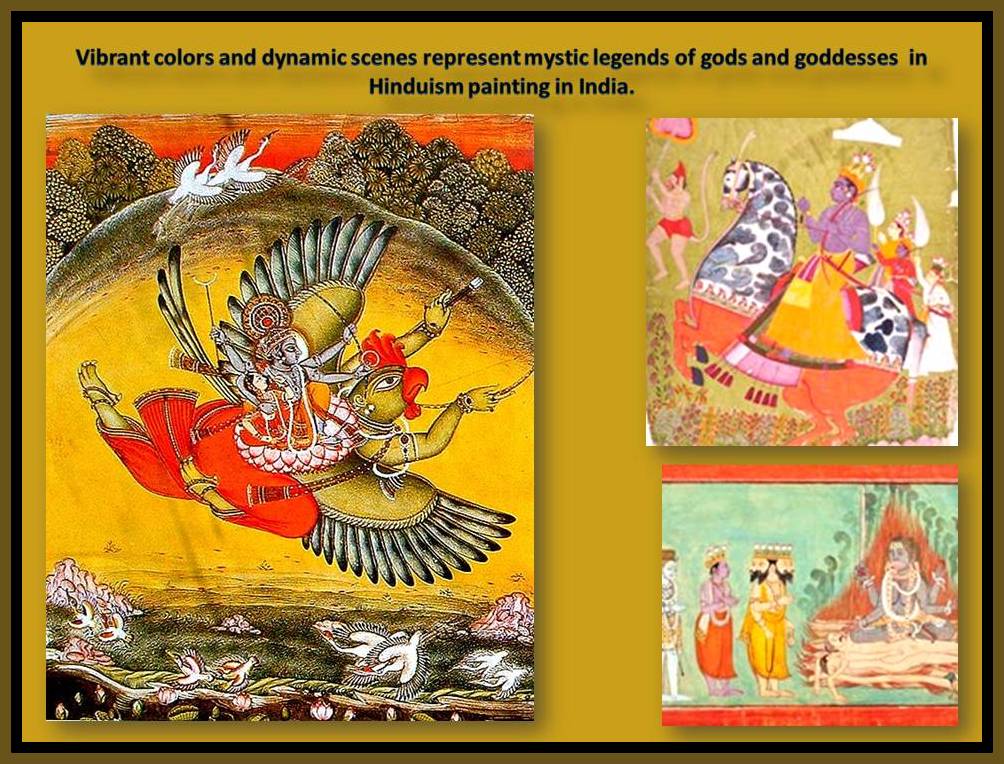 Demons are often symbolized with multiple heads to indicate their superhuman powers but the occasional representation of a deity with more than one head is generally motivated by a desire to portray different aspects of the character of that deity. So, when Lord Shiva is depicted with a triple head, the central face indicates its essential character and the remaining faces represent the aspects of ferocity and happiness. 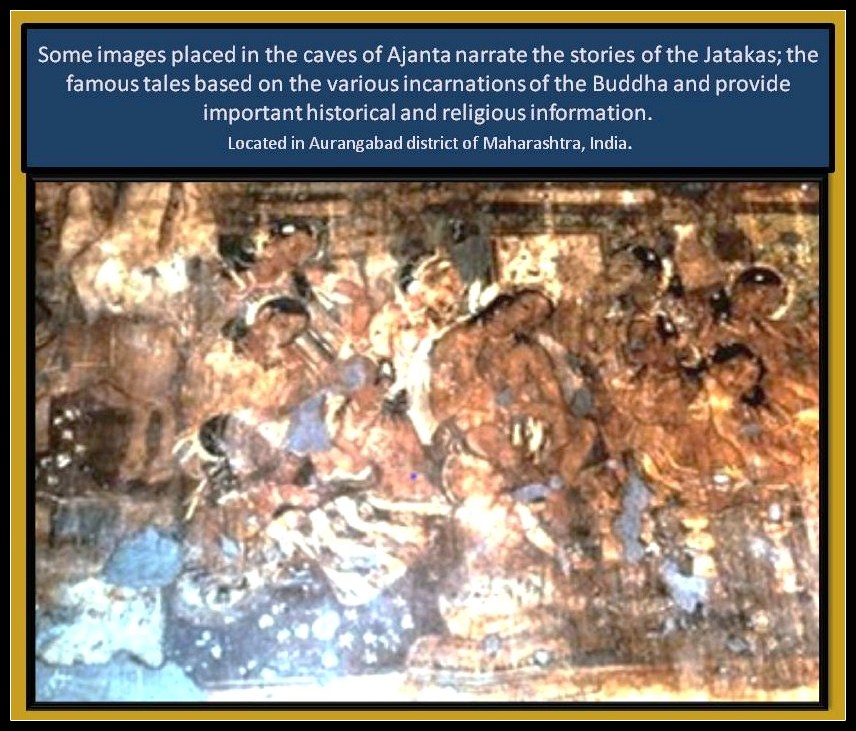 Symbolic and narrative style that make up these paintings is effective for understanding the message by believers and worshippers, they are however as we had mentioned earlier; difficult to understand by the viewer not familiar with stories, rites and legends associated with these religions. In the case of the Buddhist painting the subject is limited to represent the Buddha-figure offering protection and spreading these teachings. Some images placed in the caves of Ajanta narrate the stories of the Jatakas; the famous tales based on the various incarnations of the Buddha and provide important historical and religious information. They are located in Aurangabad district of Maharashtra, India. 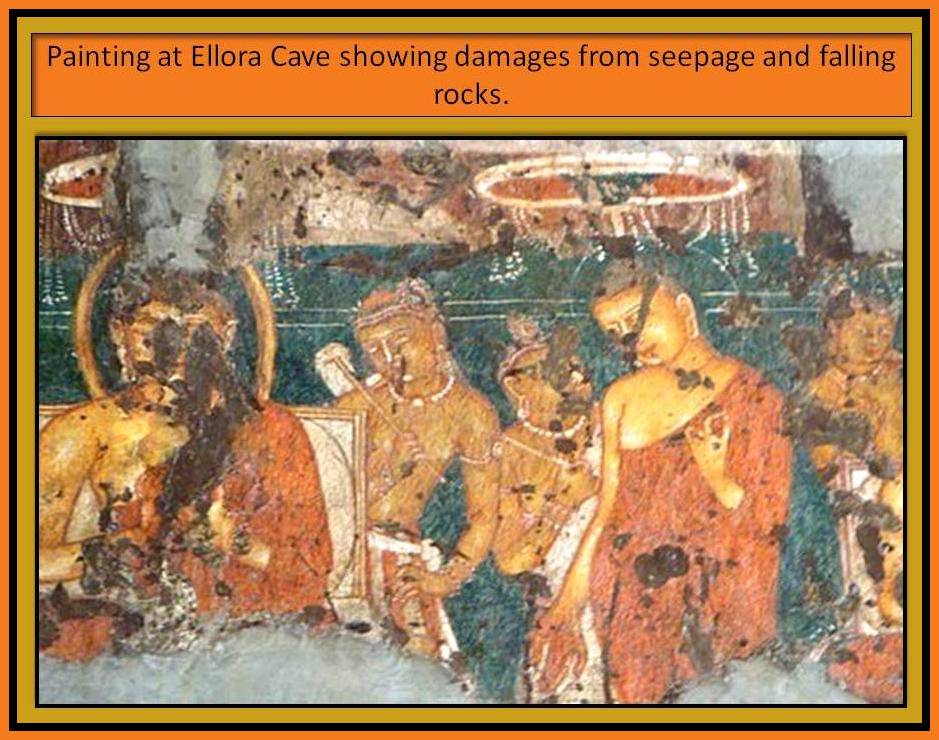 Paints made for the sacred lightings text in Indian’s temples.

These were not only extremely beautiful and with high level of detail and finish but also, to order copies of these sacred lightings texts was a very important religious action since it increased good karma; concept based on the belief that all action (karma in Sanskrit) has its consequences.

The tradition of illuminating manuscripts began to flourish in India around the 11th century, in Buddhist monasteries, where painted scenes that embellished the copies of the sacred texts facilitate meditation. Devoted people of Buddhism, Jainism and Hinduism had these religious texts commissioned which then donated to temples to enhance their spiritual merits. The most ancient works of this genre were painted in palm leaves, using a horizontal format that it will remain even after entering paper in India. 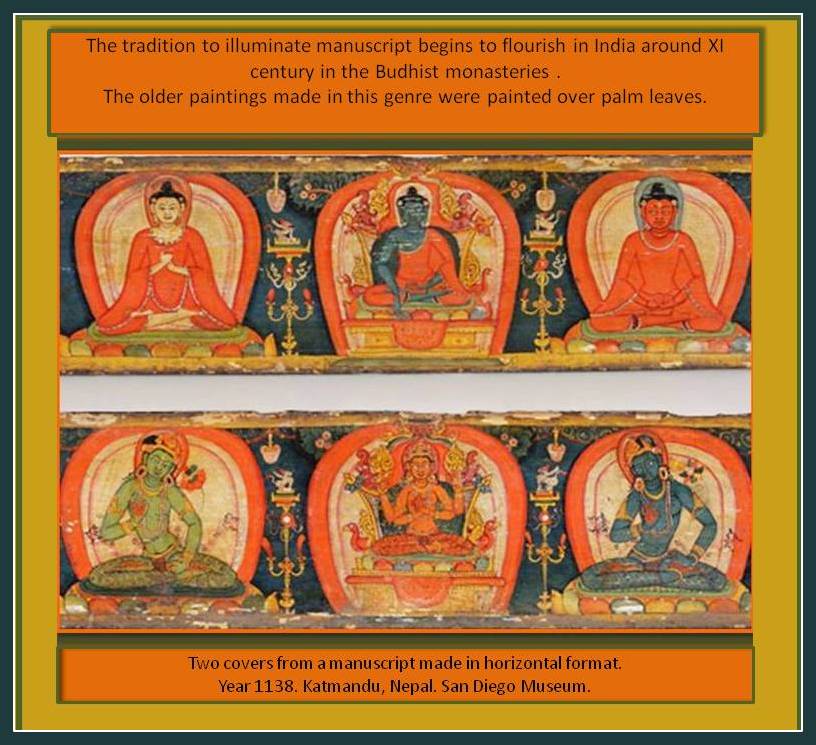 Until the 15th century Indian painters used a conservative and repetitive style, with a limited palette and low amplitude thematic; but this changed when the diffusion of illustration work in the workshops of the courts at the beginning of the 16th century. 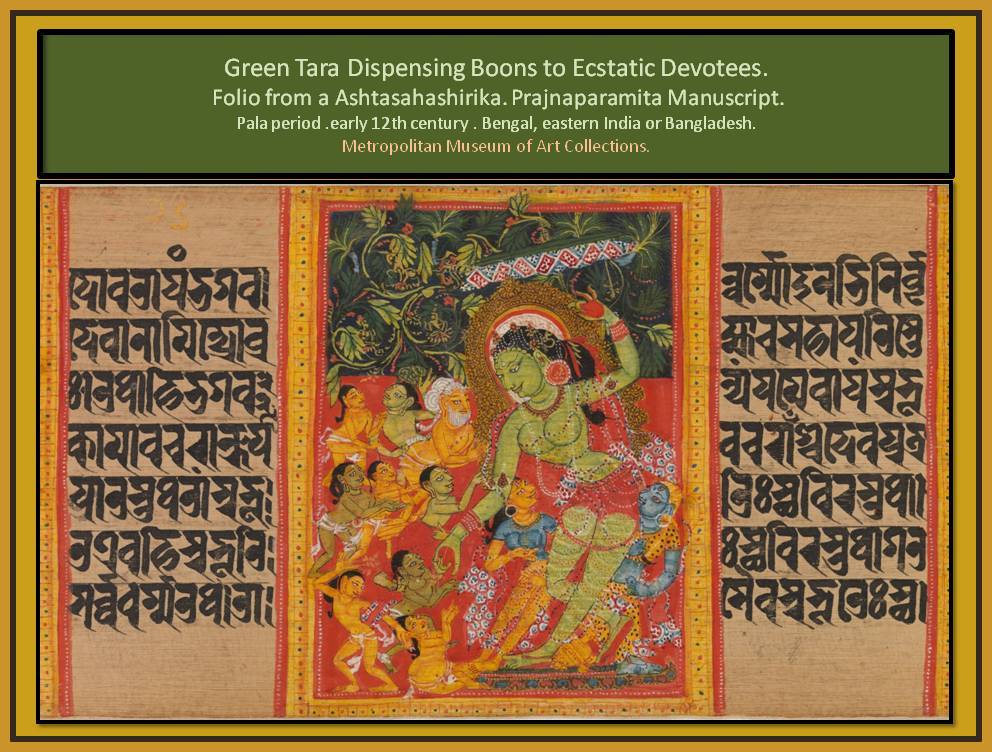 Local artists received formation there and the new Knowledge meant an enrichment of its work and that encouraged them to illustrate new texts, as the victories of the goddess Kali, devotional works to the god Krishna or philosophical texts. The thematic are expanded now in general, that now range from worldly affairs (with apparent insignificance), religious issues and the pictorial staging of legends and folk tales. 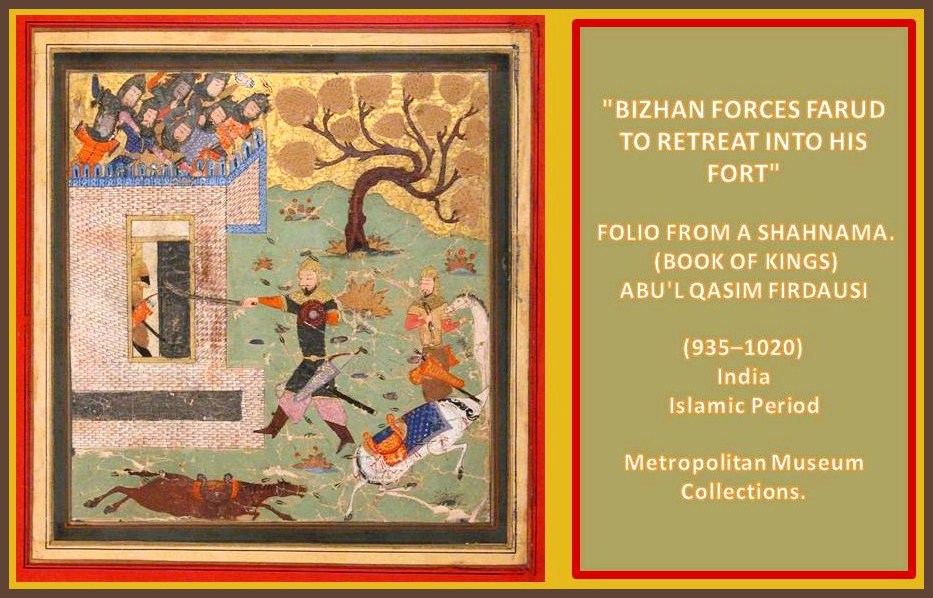 From the 15th century in India are elaborated the most popular Persian narrations commissioned by a clientele of elite formed by wealthy Persian families that seated here, they were not only seeking increase its spiritual merits but seeking as well to show these works as a sign of education, wealth and cultural sophistication along to enjoy them by the decorative function of visual delight.

These carefully made pictures denote a sumptuousness that amazes spectators, one significant example is seen in one of the first works that was illustrated in the India and that was a version of the Khamsa, a set of five Persian poems, written in the 13th century, the illustrations from this period are known as lyrics for their high poetic, epic and dramatic content very in tune with the influence of Persian art. 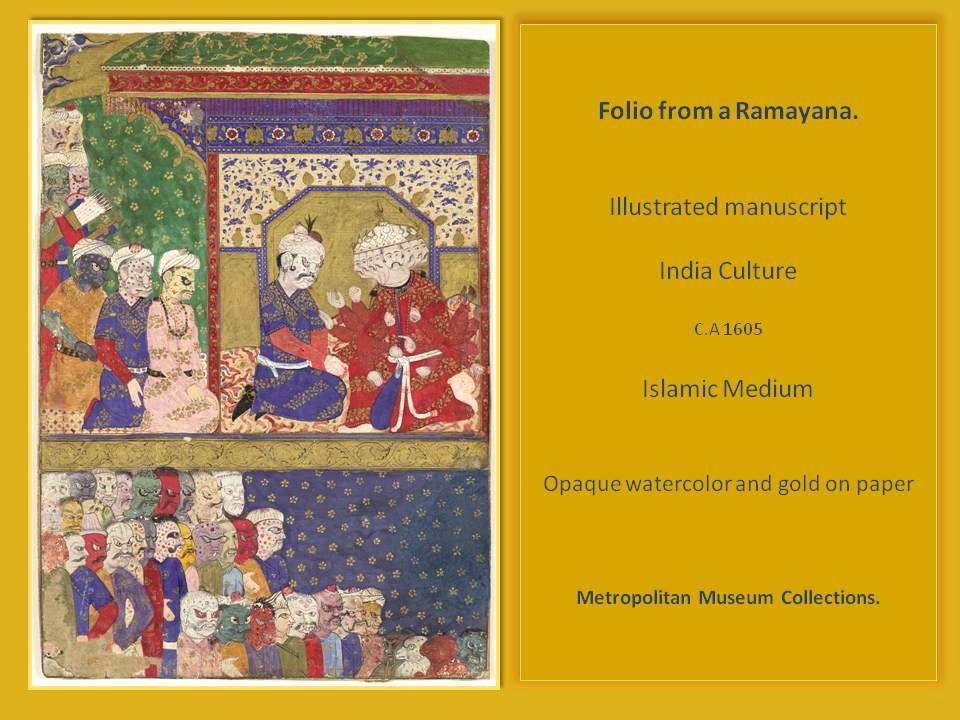 The painting of the period with the splendor of the Mughal Empire has left as a legacy one of the best known representations of Indian art. The Emperor Akbar (1556-1605) was partly responsible for this explosion of magnificence; he contracted hundred of talented Indian’s artists so they will work in the imperial workshop under the direction of seven painters from the Court of Iran. The works that the artists of this group jointly conducted was subdued by the realism imposed by the taste of the Emperor and constitute an excellent set that reveals a new style, endowed with a vitality without precedent that deviates from the traditional and already repetitive schematics  themes of previous styles. 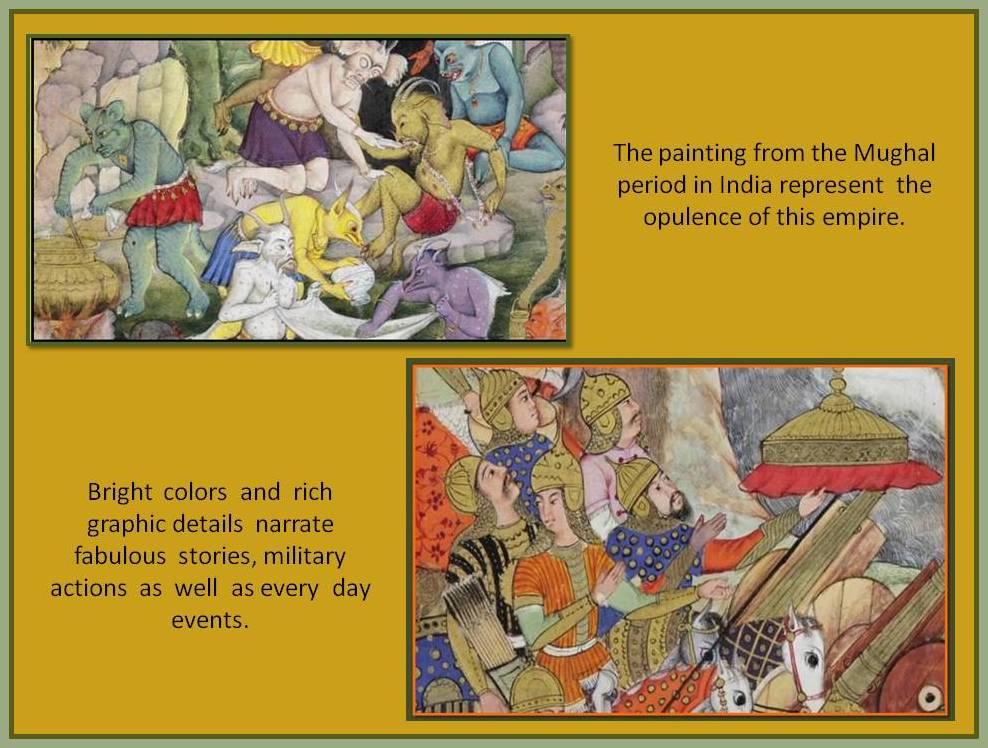 This sumptuous painting is characterized by its bright colors’, its incredible attention to detail and graphical richness. These stories captivated the powerful Mughal emperors of India and their courtier’s circles. Mainly under the tutelage of the Mughal Emperor Akbar in the 16th century as well as its successors, some painters came to highlight and their work was very much appreciated by collectors. 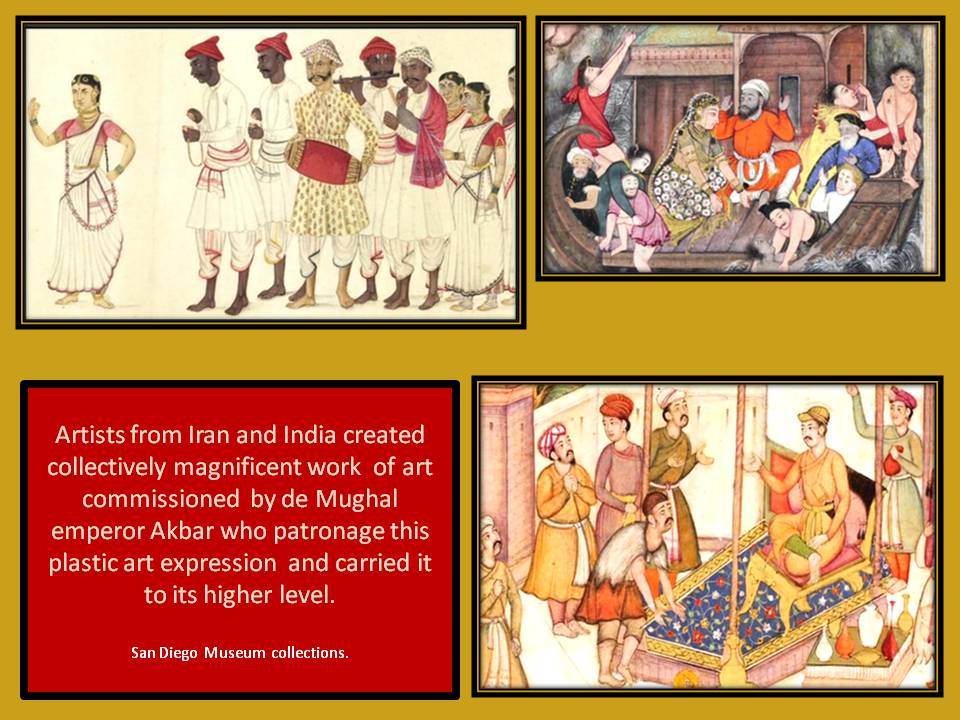 Both Akbar and his successors in power became interested in the European prints that 16th century Jesuit missionaries lead to India. Those prints, as well as the emergence of Mongol paintings in the Europe of the 18th century conducted to the incorporation of oriental elements in Western painting and served of course also as inspiration to the Indian artists who takes advantage of this aesthetic and stylistic interchanges that helped shape Indian painting as it is today.

Works made by Indian artists for British merchants, science investigators as well as for officials matters linked to the East Indies Company, reflect the interest in methods of scientific research generalized in eighteenth-century Europe, Indian artist were commissioned to reproduce realistic examples of local flora and fauna and portraits of distinguish personalities.

Indian artists adapted very well to the new challenges and interpreted the forms of the European artistic conventions such as; shading, perspective and a discreet chromatics palette, as well as a sense of estrangement between the spectator and the work. These paintings with interest in the animal genre continue for a long time. 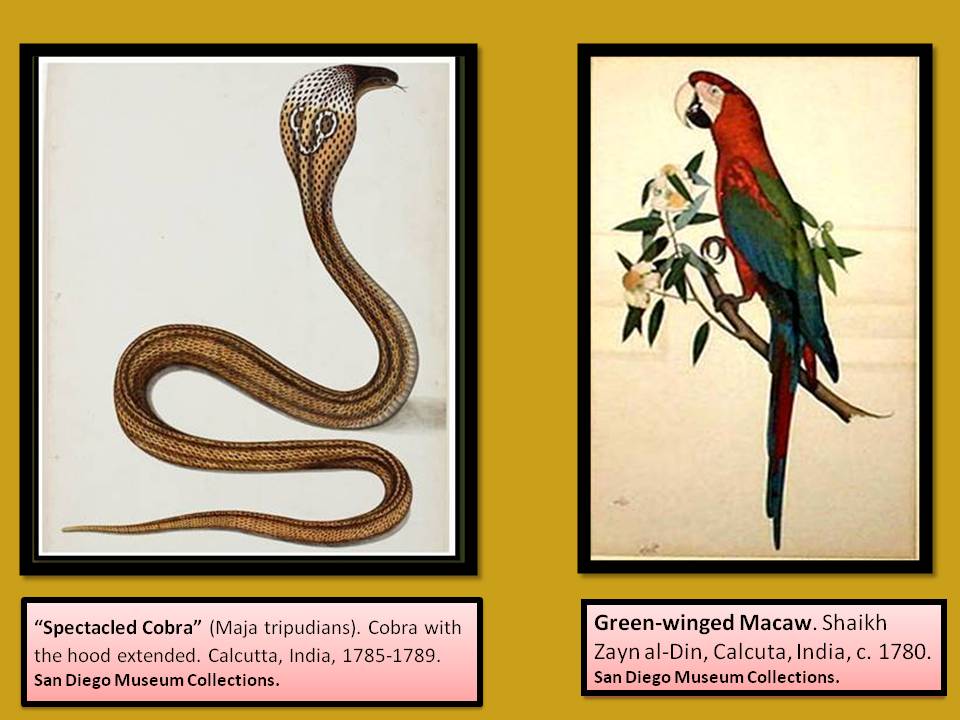 During this period emerge an interest towards the portrait representation, tendency that helps to document people and important events. The portrait style Cameo become a very popular and demanded commission art , until the demand for this type of work declined from 1848, when the East India Company began to dissolve and a new medium, photography almost  replaced in large part the painting as a procedure for documenting people and places of the now officially-colony of the British Empire.

Most common painting features develop in India through time.

– The adaptive capacity of its artists.

– Their love for nature and animals.

– The attention to detail in their work.

– The use of incredible Visual games between the elements of the group.

– Most frequent use of the three-dimensional volume instead of chiaroscuro. 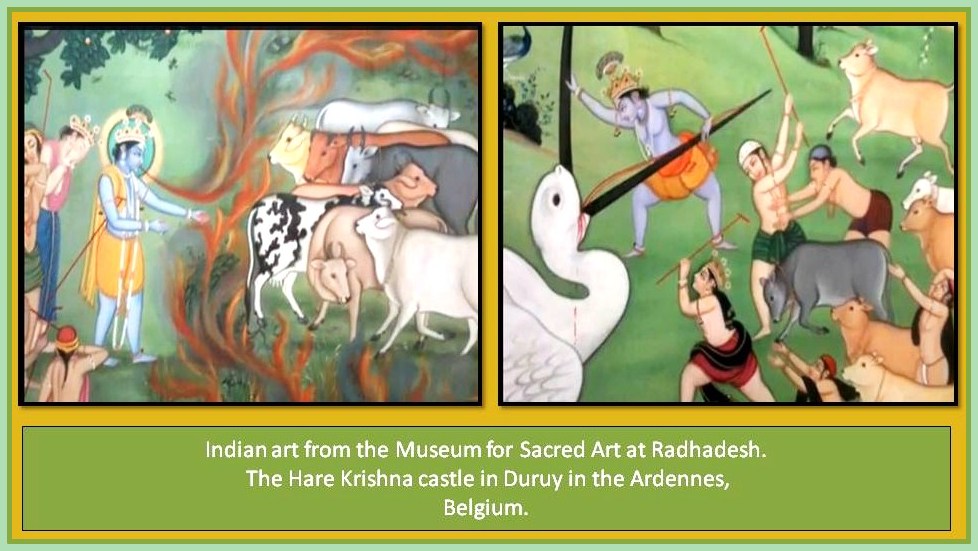 Link to this post!
📂This entry was posted in Art of India in ancient times. Paint in ancient India. 📎and tagged illuminating manuscripts India plastic at lyric period Moghol pain in India sacred text volume
« Ceramic and pottery in the ancient art of India. Architecture of India »