Greek culture develop a very refine ceramic art that was imitate by various cultures in ancient times; among them the Etruscan and other peoples in the region. Their ceramic was highly appreciated and was always in demand because of is quality and variety.

This is of the called Greek “minor Arts” the one that better and more varied in scenery and painting refers. Their ceramic production gives us a glance at their very sophisticated and varied techniques and a more approachable idea about their  artistic evolution.

With a style and techniques, characterized by having different shapes and be very original, dominated by geometric elements arranged in stripes, shades of clay, from yellow to Brown grey, presents figures in red on a black background, or the background red with black figures, predominating animal and human forms. Greek pottery had as base material  clay and used several types of this one.

Type of Clay in Greek Pottery.

The clay of Athens was rich in oxide of iron and with cooking acquired a beautiful red-orange color.

The Clay from Corinth, devoid of iron oxide, had a whitish color. These differences allow determining the source of the ceramic craft origin.

Once the paint had dried, the painter led the Potter to step in for the cooking, that was relatively simple in principle, but requires care and experience nevertheless and had three stages.

Stages of the cooking in Greek Ceramic.

Proof of its importance and prestige is the fact they were signed by both  the ceramist and the painter. 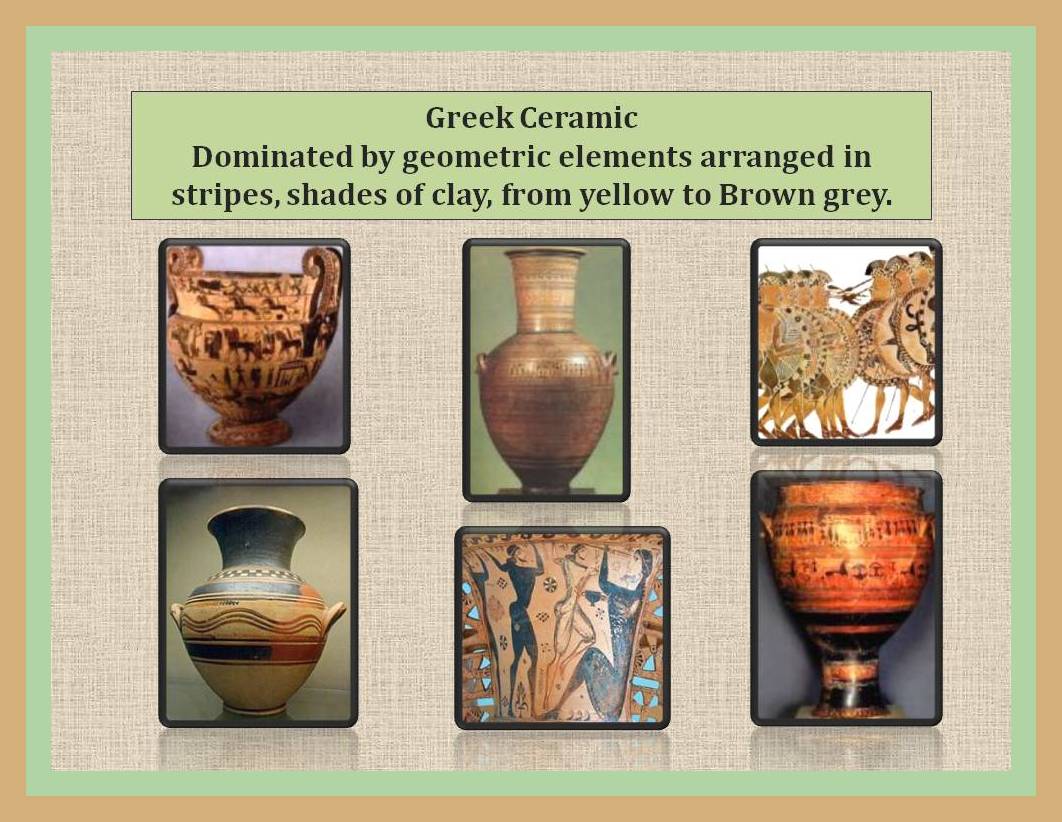 Geometric style of greek Ceramic. (10th centuries to the VIII BC)

Geometric decorative motifs in horizontal bands are the main theme. They were arranged in bands separated from black areas by triple lines. With the time, the balance between decorated bands and shady bands broke in favor of the decoration: the meanders and other thematic motives ended up covering the ceramic vessel.

In the call “Middle Geometric” was introduced the figurative aspect representing animals, such as horses. The Geese and deer are now combined with the bands of geometric style. 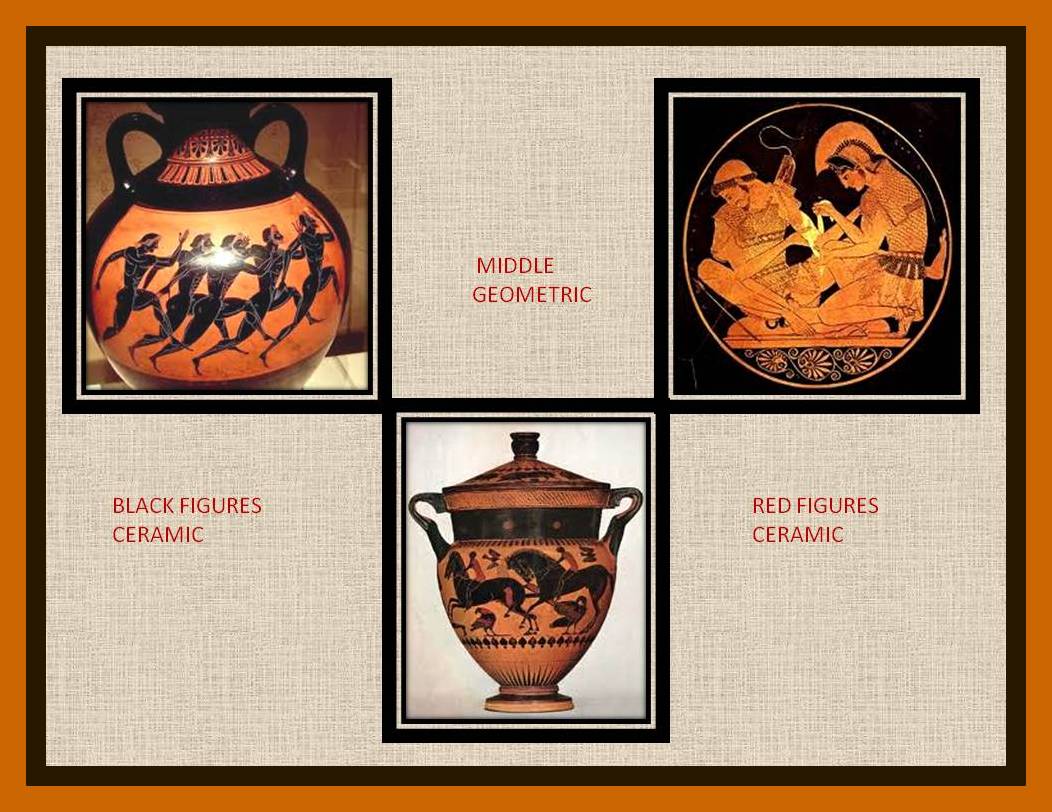 The vessels begin to be decorate lavishly without leaving any empty space, showing signs of what is known as “Horror vacuous”; Latin expression which literally means (fear of the vacuum) and is a term much used in criticism of art to point out this phenomenon in the decorative aspect.

In the Center usually appear scenes with the following characteristics:

–       Painting flat, without perspective and proportion.

THE CORINTHIAN STYLE (UNTIL THE 6TH CENTURY B.C.)

This style shows decoration of animals, real and fantastic, in horizontal stripes on a white background.

THE  ORIENTAL STYLE (UNTIL THE 6TH CENTURY B.C.)

This style was influenced by the Eastern motifs, human figures were here the main character; also show the uses of horizontal bands in the decoration of this vessel. One example of this period is the Francois glass: from the sixth century b. C.

From the 6th century B.C the narrative shifts the geometric to a second places, until definitely disappear the bands decorations, becomes this figures then the single motives in the belly of the item.

Example Odysseus and Ajax playing at the funeral dice. Please note here the appearance of the human figure, silhouette in black and ochre funds. It is characterized not only by the drawing of figures in black on the bottom of clay, but also by the use of incisions.

The scenes represented in the vessels gain in naturalism and expressiveness. The perspective and sense of spatial reality effects are achieved. In this case is use a reverse technique to the one used for the black figure in which on a black background highlighted figures in red for the color of the clay that was used to obtain the mixing of the paint.

There are also a greater delicacy in the details and greater complexity in the grounds. In addition to the simple investment of the colors, red-figure pottery technique allowed an improvement of drawing, particularly in the representation of the draped, the bodies and other details.

The precision gained with this new technique allow substitute almost complete the use of the polychromic, winning in fact the achievement of a most realistic expression.

It is also develops in the 5th century BC, when more colors are added to the palett.