The Byzantine Art developed along many years important achivetment  in the representation of Christianity temathics in Europe, it was the continuation of the Roman Empire in the East long after the fall of this one. Byzantium maintained a culture equaly  important as the Roman Empire for a long time actively protecting all of Europe from both invasion and cultural destruction. Without the Byzantine Empire,  Islam would almost certainly today be the only surviving religion in Europe. History would have been very different from all philosophical, religious and cultural aspects. The importance of this culture have been not enough positive recognized, centurys of art and knowledges needs to be better studied for what really meaned to the human history and cultural heritages.

The Emperor Theodosius half a century later in 395 divided his Kingdom between his two sons, and creates two independent States:

• The Western Empire, with Rome as its capital.

• The Eastern Empire, with Center in Byzantium.

The Greek city of Byzantium, who had dominance amounts the Roman province, ascend by decision of Constantine the great, to the rank of imperial capital under the name of Constantinople in 330 of our era. Today that city is named Istanbul. The geographical situation of Byzantium in close and continuous contact with the kingdoms of East, influencing it, but displays also great influx of the Asian world, which is largely reflected in his art. 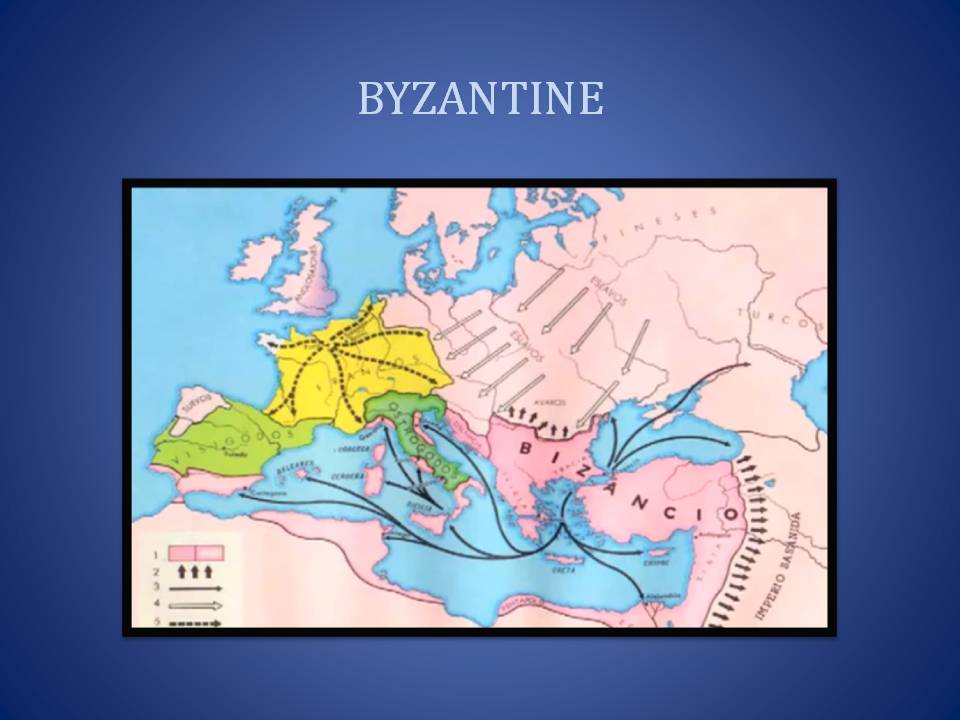 The Byzantine culture takes place during long time, begins in the 4th century and culminating with the fall of Constantinople in the hands of the Ottoman Turks in 1453, in the 15th century. Byzantium shows all the features of an original, theocratic monarchy (where the clergy and the Church have a preponderant role of control and subjugation through religion) as well as totalitarian and repressive power through the political authorities.

The Byzantine Art takes important elements from the Greco-Roman classical art (like the basilicas for example); but were adapted more to the needs of liturgy and congregation purposes that could hold as many people in its large central room as possible. Byzantium preserved the old art and culture of the Roman Empire but with a fresh perspective, innovated its own new set of dogmas, politicals rules and artistic characteristics; including new styles and techical advances in art, literature, architecture and engineering. Byzantine contributions to Western culture are still around us every day.

This culture can be study better taking into account the three fundamental periods of classification designate for each; due to the extensive proportions of time been covered; about ten centuries of evolution and validity of this interesting Byzantine cultural heritage.

The Byzantine painting, sculpture and architecture  are explained in separate post in this web site to better understand this artist manifestation that were developed in a very extensive period of time. Below are the links to this post with more information and images.

Below are the links to this post with more information and images.

Link to this post!
📂This entry was posted in Byzantine Culture 📎and tagged Emperor Theodosius theocratic Monarchy